1. I just finished reading a book called A Man Named Ove by Swedish writer Fredrik Backman. It is absolutely one of the best books I've ever read.  I'm not going to tell you about it.  Read it.

2. Have you ever written a letter or email to a Congressman?  I have. Over the years I have written senators and representatives about a variety of issues.  The latest messages were emails to two Senators.  Every congressman has a web site which makes it easy to tell them what you're thinking or ask them a question.

I wrote to Senators Blumenthal and Murphy of CT.  I expressed my outrage over Trump's recent executive order repealing what I considered to be important climate regulations.

Usually what happens is that you get an auto response thanking you for your input. Whether or not the person it was supposed to go to has actually seen it is anyone's guess.  I did get two responses to the last message I sent to Sen. Chris Murphy before this one so we'll see.

Still, does it do any good to complain to a congressman?  Especially if that congressman is a member of a minority party?  Probably not but I have to confess it did make me feel a tad better.  At least I got my two cents in.


Posted by George Stockwell at 3:08 PM No comments:

I've been watching the debate in Congress on the Affordable Care Act bill being pushed hard by Trump, Ryan et al.  The bill is a disaster and would be terrible for the poor and elderly.  Ironically, most democrats and many conservative republicans are on the same page on this although for different reasons.

Failure to pass this bill would be a huge defeat for the Trump administration.  Let's hope it doesn't pass.  Stay tuned.

Posted by George Stockwell at 3:34 PM No comments:

Hello, Spring. Bring on the warmth!

In keeping with my goal of sharing pretty much useless information, here are some spring facts for your enjoyment.

·  The first day of spring is called the vernal equinox. The term vernal is Latin for “spring” and equinox is Latin for “equal night.”
·  According to a Facebook study, couples are most likely to break up in the spring and two weeks before Christmas. The lowest breakup time was Christmas Day and from August through October.
·  The fall and spring equinoxes are the only two times during the year when the sun rises due east and sets due west.
·  On the first day of spring, a person at the North Pole would see the sun skimming across the horizon, beginning six months of uninterrupted daylight. A person at the South Pole would see the sun skimming across the horizon, signaling the start of six months of darkness.
*Spring babies are at a greater risk of developing several ills
·  While springtime brings flowers and warmer weather, it may be the worst time for human babies to be born. A large-scale study found that babies born in the spring are more likely to develop schizophrenia, bipolar disorder, major depression, and anorexia.
·  Holidays that occur in spring include Easter, Passover, April Fool’s Day, Earth Day, Arbor Day, Mother’s Day, Father’s Day, Cinco De Mayo, and Holi (festival of colors in India).
·  One long-term study found that, at least in the Colorado Rocky Mountain region, spring begins, on average, about three weeks earlier than it did in the 1970s.
·  Easter always falls on the first Sunday after the first full moon after the spring equinox.
·  The first spring flowers are typically lilacs, irises, lilies, tulips, daffodils, and dandelions.

·  The myth that it is possible to balance an egg on its end on the spring equinox is just that: a myth. Trying to balance an oval-shaped object on its end is no easier on the spring equinox than on any other day.
·  While some people prefer not to feed birds in spring and summer, during the spring migration, a feeder might be a useful source of food for traveling birds.
·  The term “spring fever” refers to a both psychological and physiological symptoms associated with the arrival of spring, including restlessness, daydreaming, and increased sexual appetite. While the exact cause is unclear, scientists believe that increased light, more exercise, and more bare skin influence hormone levels.
·  The word “season” is from the Latin sationem meaning “sowing” or “seed time.”
·  While December is the most popular time to get engaged, late spring (June) and fall (September) are the most popular months to get married.
·  According to the National Association of Realtors, spring is the most popular season to sell/buy a house. Buyers are usually hesitant to move during the winter when the weather is colder and kids are in school. So, while there are lots of houses to choose from in the spring, property prices are at their highest then.
·  A “spring tide” has nothing to do with the season of spring. Rather, it connotes a “springing forth.” Spring tides happen twice each lunar month all year long, regardless of the season.
·  Children actually grow faster in the spring than during other times of the year.
·  The early Egyptians built the Great Sphinx so that it points directly toward the rising sun on the spring equinox
·  Honeybees are more likely to swarm during the spring. They swarm as a way to start new colonies from successful ones. Surprisingly, swarming honeybees are very docile and the most friendly they will ever be all year.

Posted by George Stockwell at 10:02 AM No comments:

How old is YOUR snow shovel?

Odd question, isn't it?  The reason I ask is because a few days ago we got hit by the largest snow storm of the year.  As usual, news crews went around talking to  merchants who sell snow shovels.  The common answer is "sold out."   I find this amazing.  Why do so many people need snow shovels?  Do they throw them away after every storm?  Do they get lost? How can you wear out a snow shovel?

I have three snow shovels.  Each one has a purpose.  My oldest shovel is made of metal and it's over 30 years old.  My second one is about 5 years old.  The one it replaced had a cracked wooden handle. It was about 15 years old.  The third one is about 3 years old. It's one of those designed for pushing the snow.  It replaces one that after about 10 years it was so worn down it did practically nothing.  So I suppose stuff does happen but to so many people so often?

Beats me. But this is how my mind sometimes works.  Silly things like this stick in my head so naturally I share it with you.  Now you can think about it too.

So Happy St. Patrick's Day one and all.  Now go find your shovel.  More snow is on the way!

Posted by George Stockwell at 7:34 AM No comments:

Solve all our problems. Send money.

I'll bet I get at least 5 emails a day that are actually for the purpose of raising my money.

Take for example the emails I get from politicians from all sides either criticizing Donald Trump or speaking out in support of his policies.

They usually begin with a headline blaring from the screen saying something like "join me in protesting this dreadful appointment to _________ (fill in the blank)."  Then it goes on to ask how much you're willing to send, be it a lowly $5 or a super supporter of $500.

I've often wondered how giving them money is going to help.  Are they going to use it to fund a law suit?  Or maybe they're going to hire lobbyists.  Of course in reality, the money is going into their campaign coffers with the argument being if you help them  get re-elected they'll be able to continue the good fight.

Needless to say, I never donate.  But the emails keep coming. Every day.  And somehow they manage to avoid going in my spam folder.  I wonder how they do that.


Posted by George Stockwell at 11:37 AM No comments:

My web site vs this blog

Every year about this time I have to make a decision as to whether or not I should continue paying for hosting services for my web site.  The blog you are reading now is a separate-and free-web presence. You can get to it from a link I embedded in the navigation bar of my web site or directly by using its own URL.

The two web sites serve different purposes.  My blog is 99% text.  As you can see if you've been following it, the purpose is to give me a forum for my opinions on a variety of topics.  My web site does three things.  The photo gallery is the biggest in content with pictures, slide shows and video.  Then there's a link to this blog and finally there's an almanac link wherein I post information on the current month.

I will definitely keep going with my blog since it's free so now the question is should I continue my web site.  It costs me about $8 a month for the hosting service.  It's certainly not going to break the bank but it does require time and effort-although I have to admit I enjoy doing it.

My web site gets about 20 views a week so someone somewhere is looking at it.  Recently, I've changed the direction of the photo gallery a little.  I still have family pictures but I've begun to post more nature oriented pictures as well.  This is especially true since I've developed an interest in photography. They are all pictures I've taken.  None are obtained from the internet. If I decide to continue my web site, I'll  continue this trend.

I always ask for suggestions or ideas as to how I could make my web site better.  Check it out and if you have an opinion, let me know.  There's a 'contact me' button in the nav bar.

Thanks.
Posted by George Stockwell at 7:31 AM No comments:

THE DEMISE OF PROOFREADING!

Proofreading was one of those writing skills we used to drum into our students' heads over and over again.  Reread what you've written.  Does it make sense?  Are there any spelling mistakes or misused words?  If so, FIX IT!  Eventually kids realized that if they didn't do it correctly, they were simply going to get it back to be redone.

I wish I had a nickle for the number of emails,  text messages and Facebook messages I've received from a variety of people that are total nonsense.  Usually I try to puzzle it out or overlook it but sometimes I question the authors as to their meaning.  I generally get one or more of the following responses:

"You knew what I meant."
"I don't have time to go over everything with a fine-toothed comb.  Figure it out."
"It's not my fault. It's this darn phone. My autocorrect keeps doing it."
"Oops. Sorry, hit the wrong key. Hahaha."
"Well, excuse me, Mr. Perfect."

I'm no more perfect than the next person and I can understand an occasional error that falls through the cracks but the situation has become chronic.  When I've discovered a mistake I have to go back and fix it.  I can't let it stand.

I realize there's a whole new language that has sprung up on the internet.  Texting shorthand has become the norm. I think this is unfortunate.  I think there should be a law against incomplete sentences and misspelled and/or misused words (LOL. JK).  Well, maybe that's a little severe!  Let's just encourage proper usage and let it go at that.

Buy the way, there's a mistake in this post somewhere.  Did you see it?
Posted by George Stockwell at 10:08 AM 1 comment:

It's March already.  Spring is right around the corner but as we all know March weather can be full of surprises.  To learn more about the month of March, click here georgeswebpage.com/almanac 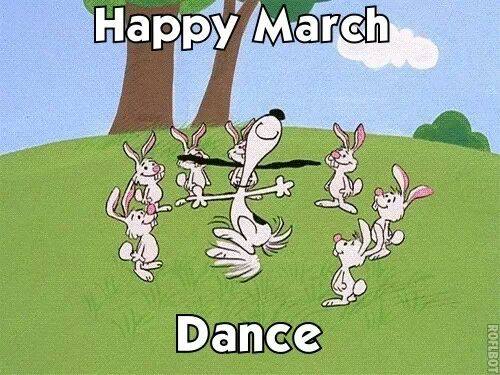 Posted by George Stockwell at 7:10 AM No comments: