Today Newtown students return to school and among those is my grand son Cole who starts kindergarten at Sandy Hook School which is the school where I taught for over 30 years.

And so it goes, more family milestones and transitions as grand children (and we) get older. 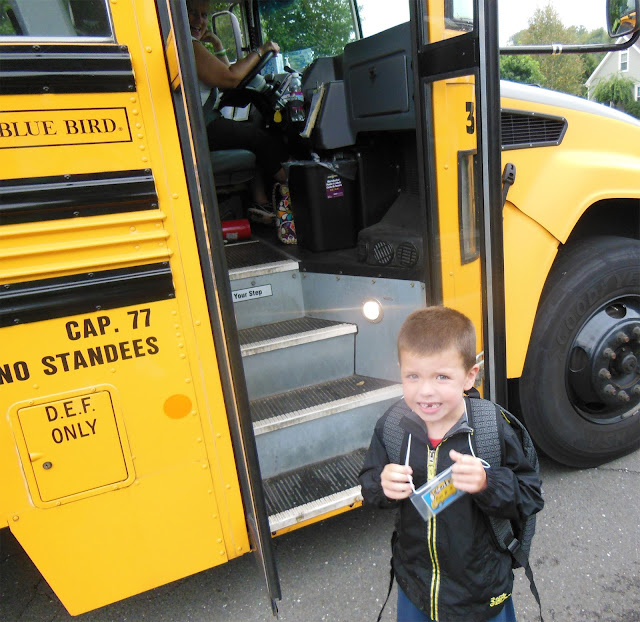 Posted by George Stockwell at 8:53 AM No comments:

I was recently asked to participate in a book-writing project that someone is undertaking. The person doing this is planning to compile several hand-written letters from various residents in Newtown for a December publication date.  The letter should be reflections regarding their life in Newtown over the years.  There were no other specific instructions.  The following is the letter I submitted:

Ah, Newtown!  Forty six years of memories all beginning in September of 1967.  It’s hard to imagine that I’ve spent two thirds of my life here. On top of that I spent 32 of those years  working in the very community where I live.  That began in September of 1973 at Sandy Hook Elementary School were I served as a 4th and 5th grade teacher, a lead teacher for three years and finally as the school’s math/science specialist for 4 years until my retirement in 2004.

My wife and I raised two children in this town and eventually my wife established an accounting firm with her partner here.  So our ties to Newtown are quite strong and certainly well established.

I have seen many many  changes throughout the years.  But it seems the one thing that has served to keep me rooted so to speak is my years at Sandy Hook School.  There were many times when I would have colleagues ask me how I could possibly stand teaching in the same community where I lived.  It must be such a nuisance to have my private life scrutinized to the same extent as my professional life.

Nothing could be further from the truth.  I loved having past and present students and their parents greet me in stores, restaurants and just about anywhere else I went.   The friendliness and affection shown to me was a constant source of comfort.

Make no mistake.  I had my share of distractors but they were in the minority and not nearly as troublesome as you might think.

I have been retired for 9 years and while I have found plenty to do, not the least of which is frequently baby sitting for 4 grand children, I still find myself thinking of my days at Sandy Hook—especially now.

I have many wonderful memories but one in particular involves the parent conferences we used to have twice a year.  The rule was that one of those conferences had to be an evening conference to accommodate the schedules of working parents.   On numerous occasions parents would use that opportunity to invite me to their houses for dinner after which we would discuss their child’s progress.   I don’t know of many other places where something like that would happen.   It served to cement relations and show the students that their education was a cooperative effort because we cared about them.

There are so many other things-the Jolly Green Giant fair, dozens of school bus field trips, Push Cart Wars Day, the Parade of States, plays, concerts, on and on and of course the most important thing of all-the kids-many of whom have reached out to me on Facebook.  It’s a source of great satisfaction to see how well so many of them are doing.

There’s a great deal more but I’ll spare you further nostalgia.  Suffice it to say these past several months have been painful beyond words-for the entire town-not just me.  But at least I still have all those great memories to draw on.

And now a word about the future, my older grandson will be starting kindergarten at Sandy Hook School this year.  I have already reached out to them as a volunteer so I can continue to look forward to many more good memories.

I think that’s the key to getting through this good life.  Dwell on the good stuff and keep moving.  Simple, right? Well, maybe not so simple but it’s the only way.

I hope you enjoyed this little trip down memory lane and I hope you have some good stories of your own to tell.

Posted by George Stockwell at 7:03 AM No comments:

Yet another milestone marking the passage of time-Nicholas is swimming on his own.

It seems every day there's something new.  Brooke isn't even in a car seat any more.  Soon Courtney or Cole will be out of one.  Cole starts kindergarten at Sandy Hook School this year. Soon all four of them will be in school full time.

The grand children are growing up very quickly and  our son Peter just turned 40...and I'm getting older and older and older.  But that's a good thing I guess because it sure beats the alternative.


Posted by George Stockwell at 5:31 PM No comments:

They boys' last day of camp was Friday the 12th so until school starts in two weeks we'll be very busy helping out.

I've been baby sitting just about every day this week and will continue into next week but at least the weather has been cooperating.

Today was one of the most beautiful days of the year and I expect they'll continue to be like this for some time as we enter the fall season.  Then you-know-what follows.

Brought the boys to the park today where they were more attracted to the water than the play equipment. 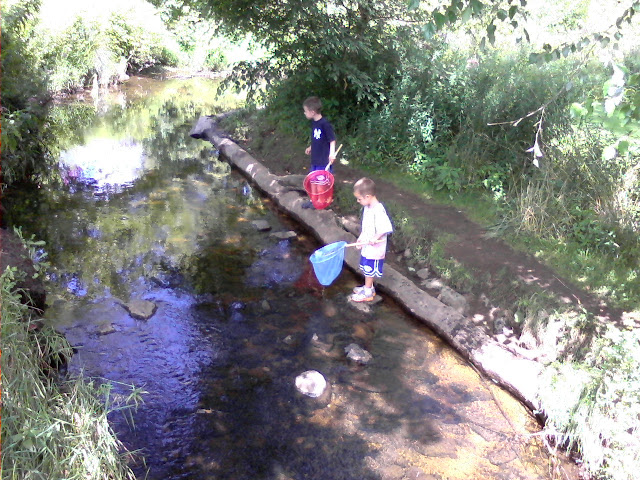 Posted by George Stockwell at 4:28 PM No comments:

If I didn't have bad luck I wouldn't have any luck!

I was able to redeem about $10 worth of cans and bottles (see previous post).  My lottery winnings?  Zero, zip, zilch, nada.

Oh well.  Until next time.
Posted by George Stockwell at 3:00 PM No comments:

With the Connecticut PowerBall now up to $420 million, I've come up with a good way to rationalize spending money on buying  tickets for something I've got pretty much a zero chance of winning.  I collect all the plastic water bottles and seltzer cans our family accumulates and redeem them.

Right now I have about 3 large bags of them.  I'll go over to Stop & Shop can/bottle center and spend about half an hour to get sometimes as much as $10-that's 200 cans and bottles.  Then I get as many $2 lottery tickets as I can depending on how much I actually get.

I know the odds are about 300 million to 1 of winning the big prize but another way to look at it is someone has to win, right?  It might as well be me.  Besides there are numerous lesser amounts with better odds.  For example with the right amount of winning numbers combined with the PowerBall number which I've gotten several times, it's possible to win several hundred or thousand or even a million dollars.

The down side-if there is a down side-is that you don't get the $420 million in one lump sum.  That much money is paid out in the form of a 20-year annuity.  If you want a lump sum, you get a lesser amount-like about $250 million.  Subtract from that state and federal income taxes and you eventually end up with about $150 million.  That's a long way from the original $420.  But I think I'll take it anyway.

I've read articles that follow people's lives after winning huge amounts of money.  What happens to many of them is not very pleasant.  But the way I look at it is by the time my family gets their hands on it, I'll be pretty much back to square one anyway so what the heck.  Go ahead, fate.  Let me win!!


Posted by George Stockwell at 8:02 AM No comments:

Happy birthday, Pete.  You're a great son, father and we presume husband. Have a great day. 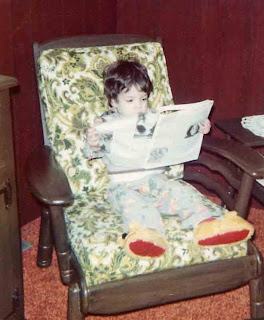 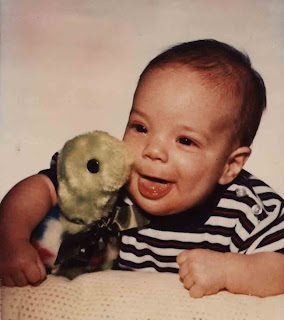 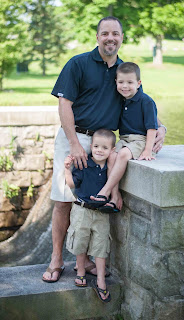 For a slide show of Pete through the years click here: http://georgeswebpage.com/photogallery
Posted by George Stockwell at 8:01 AM No comments:

Very often friends will ask me what I've been doing to fill my time since I retired.  As anyone knows who reads this blogspot on a regular basis, part of what I do is baby sit for grand children.

When I say this to some people-especially those who haven't been around young children in a long time-they kind of shake their heads and look at me with a weird expression.  Then they'll say something like I hope your kids appreciate what you do for them.

I quickly explain, I'm the one who should be giving thanks because there's nothing more enjoyable for me than spending time with my grand children.

When I say this, they respond by asking what I do all that time.

Well, in an attempt to at least partially answer that, I herewith offer an hour-by-hour description of a recent day with my two grand daughters who are ages 6 & 9.  I showed up at my daughter's house at 7 A.M. and left at about 5 P.M. Yes, that's a long day and I admit to being ready for a glass of wine but it was well worth it.

Here's how the day went:

Arrive 7 A.M.  Gave the girls about 10 minutes to finish their breakfast while I went over some stuff with my daughter.

About 7:15 went downstairs with the girls to a playroom/office where we played school.  Brooke (9) and I were students and Courtney (6) was the teacher.

Shortly after we got down there, Courtney sounded the fire drill.  We all went upstairs, out the back door and across the yard just as my daughter was backing out of the garage.  Since the girls were still in their jammies, she wanted to know what we were doing.  Courtney said we couldn't talk now because it was a fire drill.  Becky continued on her way to work.

We returned to the 'classroom' where school continued for about the next 90 minutes or so.

By 8:30ish they tired of that game so they wanted to build a character who would be me on their Wii.  For the uninitiated, a Wii is a video game.

We spent some time doing that after which the girls played a game of their own while I read the newspaper.

At about 9:15 we went to the garden to pick vegetables.  Then we brought them in, washed them and put them away.  Courtney noticed a leaf outside with a cluster of small orange eggs on it so we brought that in and did a little research on my iPad.  We found out they were squash bugs.  Courtney wanted to keep them so they could hatch but I talked her into giving them back to nature.

By now it's about 10 o'clock at which time we went upstairs where guest reader Mr. Stockwell read stories to the girls' classes while they pulled students and tested them.

By 10:45 the girls wearied of that game so we went downstairs and played Clue.  By 11:30 their hunger pains reached intolerable levels so I let them watch a show while I made them lunch.

12-1:15 Lunch and rest time.  The girls played quietly in their rooms while I played games on my iPad.  I was hoping to doze off but Courtney jumped off her toy box which was right above my head, scraped her leg and summoned her sister.  They both came rushing downstairs announcing a grave emergency.  Out with the Neosporin and bandaids.

With that catastrophe out of the way, we decided to go to the library.

2:30ish-home from the library so on to swimming and dance routines by the pool.

3:45 came in for snacks and more dancing routines but eventually Courtney wouldn't share her iPad so we had a brief period of mediation.

4:15 or so.  We decided to play checkers.  First Brooke and I played.  Then the winner (me) played Brooke and Courtney.  Courtney wanted to make her own decisions so Brooke went to her room to play and Courtney and I played until her mom's return home at around 4:45 to 5:00.


Posted by George Stockwell at 3:41 PM No comments: