1. The bill before the Arizona governor which would allow merchants to refuse service to gay people is yet one more example of unbelievable bigotry and ignorance at its finest.  It needs to be vetoed and apparently that is what's going to happen.

It never ceases to amaze me how ignorant so many people can  be.

2. Afghanistan president Hamid Karzai refuses to sign an agreement to guarantee the security of U.S. forces serving in his country.  First, even if he did sign it, he couldn't enforce it.  Second, this is clearly an example of the U.S. putting armed forces personnel in harm's way in a country that does not support us.  The next course of action is exactly what the president has threatened to do:  get out...NOW.  When and if we detect terrorist activity, send in the drones.  That way no American soldiers or marines are at risk.


Posted by George Stockwell at 9:07 AM No comments:

Daughter-in-Law Jen's birthday today.  Hope she has a great day. 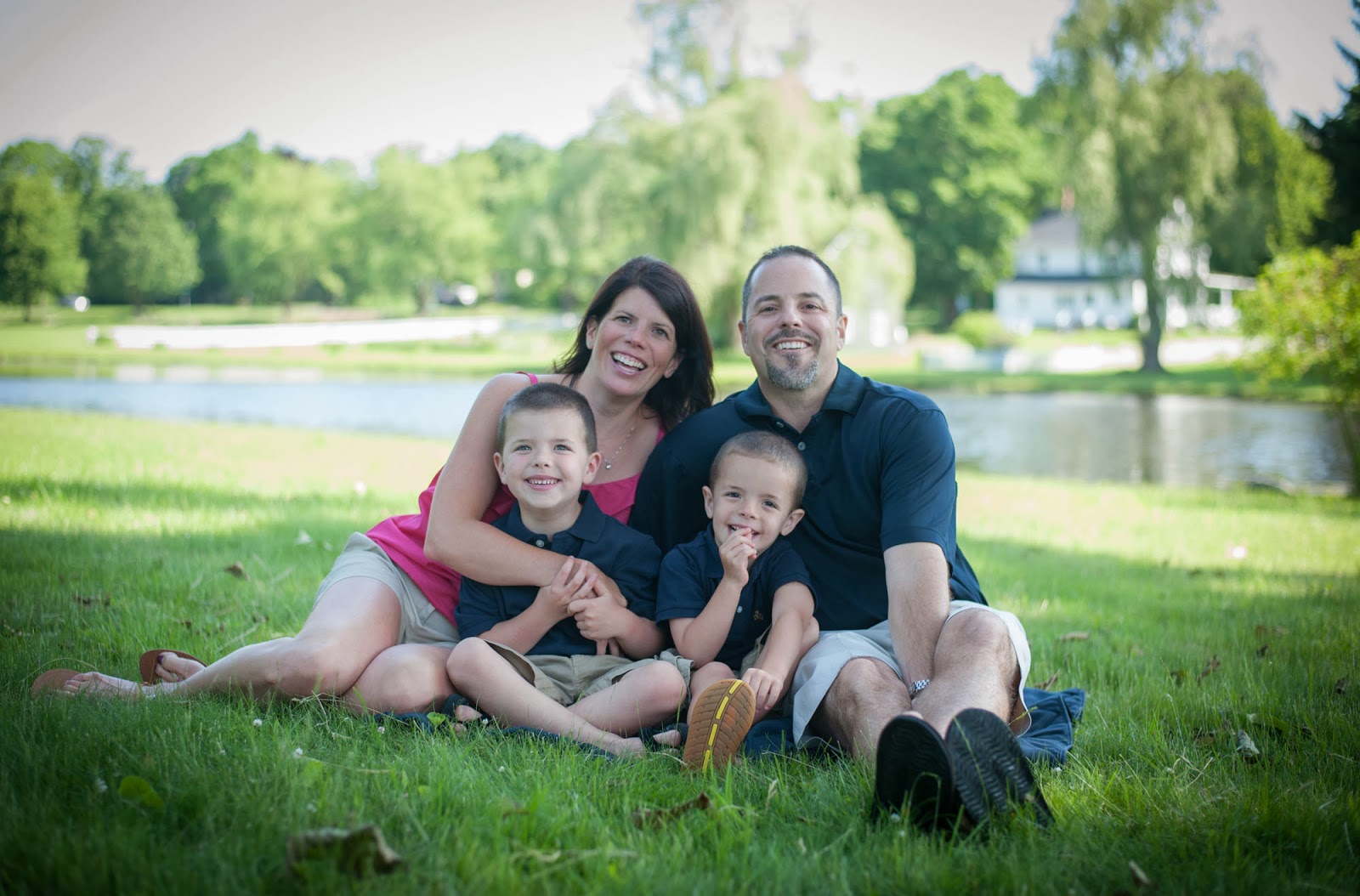 Posted by George Stockwell at 7:01 AM No comments:

More about grand children (getting sick of reading about them yet?)

On Friday I was a mystery reader in my two grand daughters' classes.  Throughout the course of the week I had to submit clues as to who I was.

Ten-year-old Brooke figured it out pretty quickly.  Seven-year-old Courtney was 90% certain but the clue where I said I loved to read stumped her.  Amazing.  With all the books around this house, she wasn't sure.

Anyway, it was a great afternoon and we had a lot of fun.  Now it's back to watching weather forecasts!
Posted by George Stockwell at 7:08 AM No comments:

Who's this handsome lad?

Four-year-old Nicholas poses before going to his preschool's sweetheart dance. Handsome little guy, isn't he?  In fact I think he bears a remarkable resemblance to his grampy! 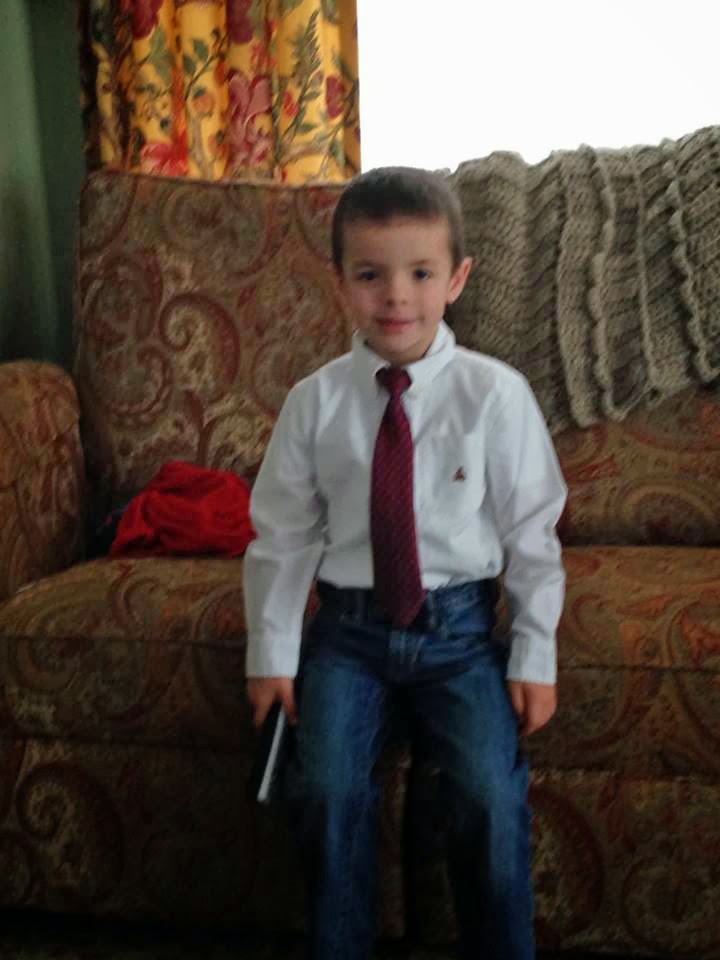 Posted by George Stockwell at 12:29 PM No comments:

I recently took this picture of 7-year-old grand daughter Courtney.  Along with her picture is an Acrostic Poem she wrote for me.  I'd say she did a pretty good job.  Wouldn't you? 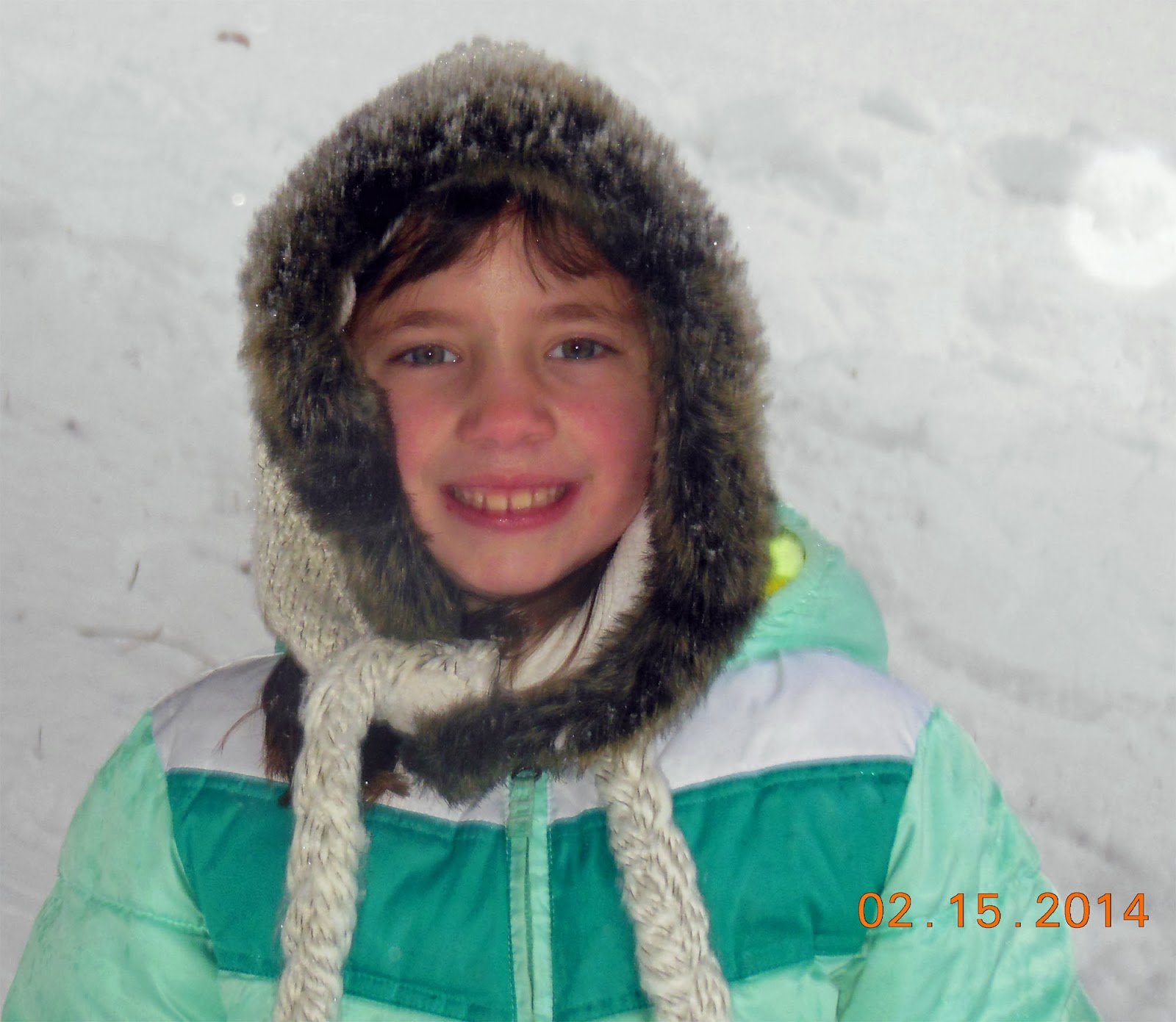 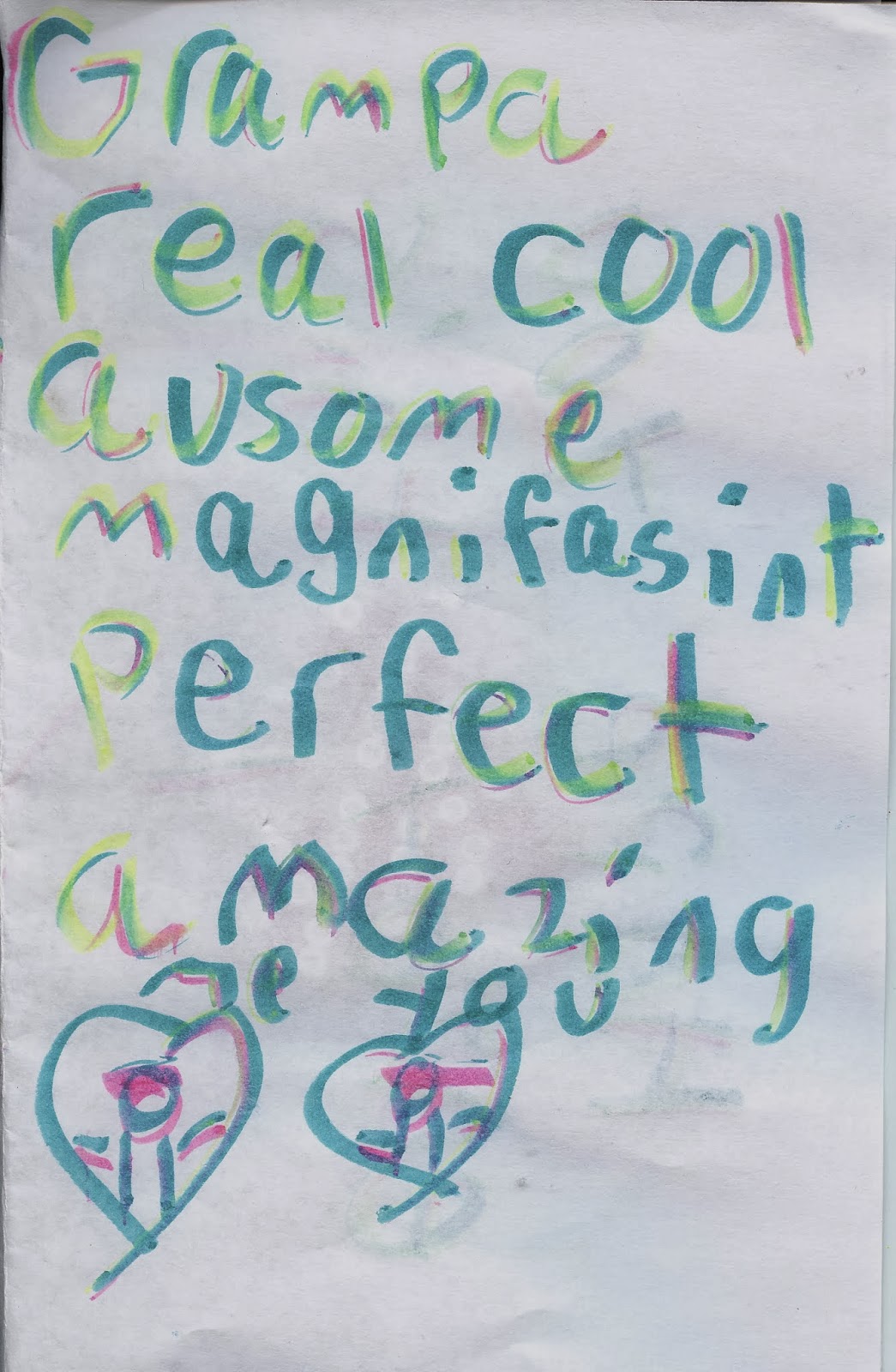 Posted by George Stockwell at 7:55 AM No comments:

Sure, I'm getting a little sick of the winter too but there are occasional bright spots.

Posted by George Stockwell at 9:32 AM No comments:

Sandi took a picture of my on-going effort to keep the driveway clear.  While not cleaning up outside, I've been experimenting with digital scrapbooking.  Click here to see the results georgeswebpage.com/photogallery 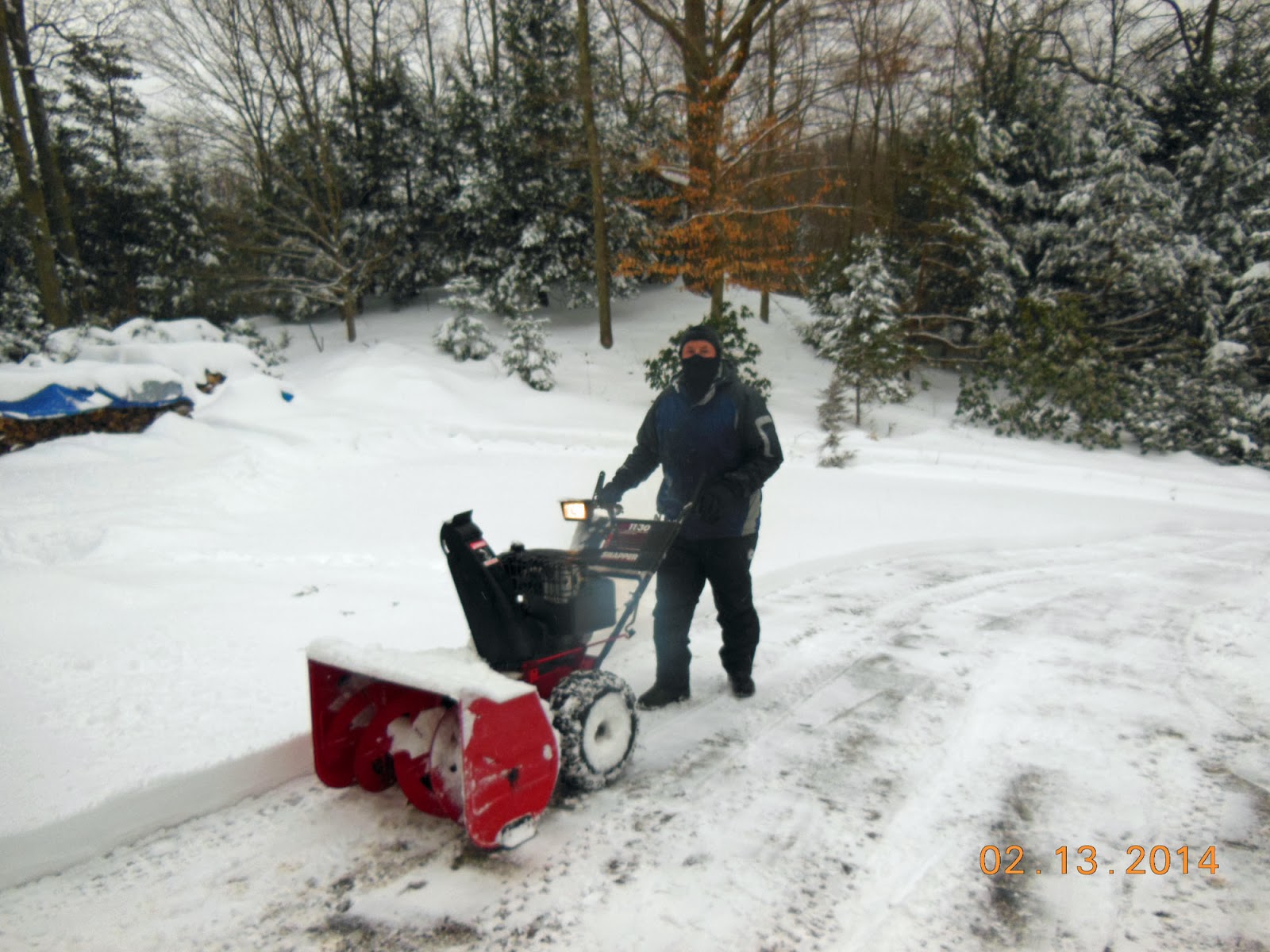 Posted by George Stockwell at 12:37 PM No comments:


So what's there to do on a snowy day?  Plenty.  Here are a few things keeping us busy ('us' because Sandi and Linda wisely closed the office-even though it's tax season!)

To start I fed the birds, filled the wood box and moved the snow blower to the garage where I can use the electric starter and drive it right into the snow.

Then we watched two episodes of HGTV's Love It or List It show.

I took care of some condo business and then switched to a digital scrapbooking project that will eventually be a compilation of the grand children's class pictures.  I'll design it so I can add to it as they get older.   I'll also post the pictures on the photo/video page of my website which can be viewed by clicking georgeswebpage.com/photogallery.

After lunch I'll give the driveway its first clearing. Then maybe again at about 5.  Then for a third time tomorrow morning.
Posted by George Stockwell at 10:53 AM No comments:

They're at it again

They don't get it.  They just don't get it.  What's it going to take for  Congressional republicans to realize they've lost this one.  They're hellbent on ruining the nation because they don't like someone.  Ideology has nothing to do with it.  It's personal.  But this too shall come back to bite them. 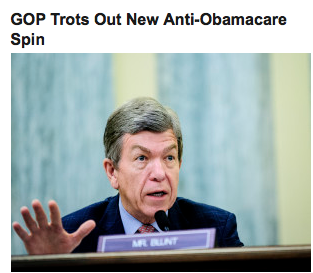 Posted by George Stockwell at 10:29 AM No comments:

Second annoyance of the day

While town crews work hard to clear the roads (and knock down mailboxes which they did to mine), private snowplow drivers are right behind them plowing driveway snow into the road making it worse than it was to begin with.

Not right.
Posted by George Stockwell at 5:11 PM No comments:

I try very hard to support local businesses.  I buy what I need as long as it's available from Newtown businesses.

But I have to say they don't make it easy.  After I cleaned the driveway from last night's storm, I went to Newtown Hardware to buy bags of rock salt.  It costs about $8 for a 50-pound bag.  I was told by the young lady waiting on me that it would cost $20 a bag.  I expressed my surprise and pointed out that I just bought some for $8.  She replied that that was for salt.  She was giving me Calcium Chloride.  She said they're the same.

The teacher in me of course had to give her a fast mini lesson but it didn't matter. I learned that Newtown Hardware won't be supplying ordinary rock salt for the rest of the winter.

So now should I spring for the more expensive alternative or go to Agway or Home Depot for the stuff I originally wanted.

I needed something now so I sprang for 3 bags but  there's enough of a cost differential to justify going elsewhere next time.  Too bad.  They couldn't give me a satisfactory answer to why they won't be carrying it.


Posted by George Stockwell at 5:10 PM No comments:

Monday, Feb 3rd was a snow day for Brooke, Courtney, Cole & Nicholas.  Since their parents still have to go to work, I had the good fortune  to spend the day with them.

So what do kids do when they have a snow day?  Well, lots of things and one of those things was to play school.  But that wasn't the only thing they did.  Here's a list of the other things:

-Play with cars, blocks and marbles.
-Play on Kindles and iPads for a short period of time.
-Build forts in the basement while grammy worked out and grampy cleared the driveway
- Brooke worked on her weaving project for a while while Nicholas and Cole played with cars & marbles.  Courtney and I played Words With Friends.
-Everyone ate their way through pretty much the whole day. 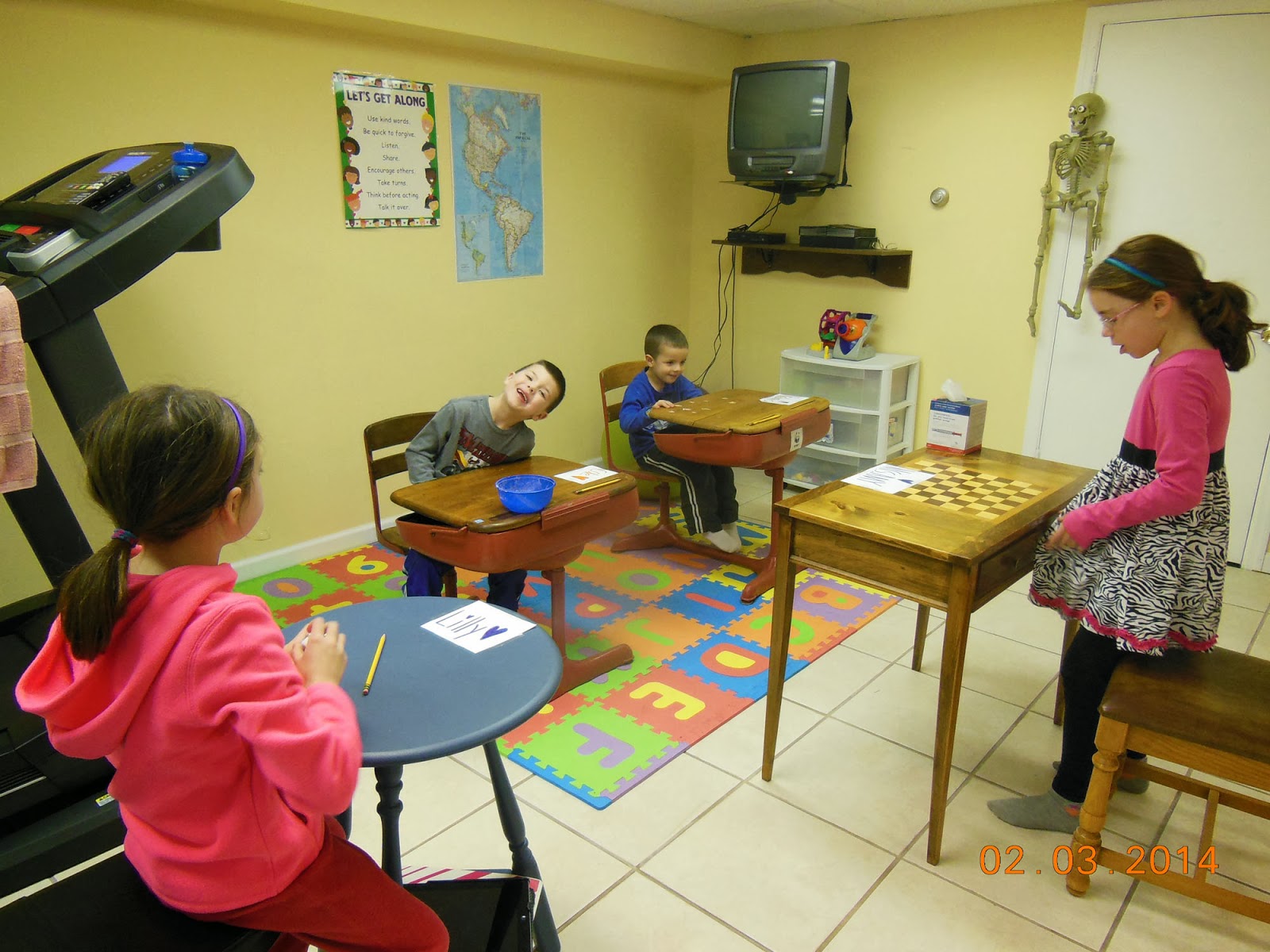 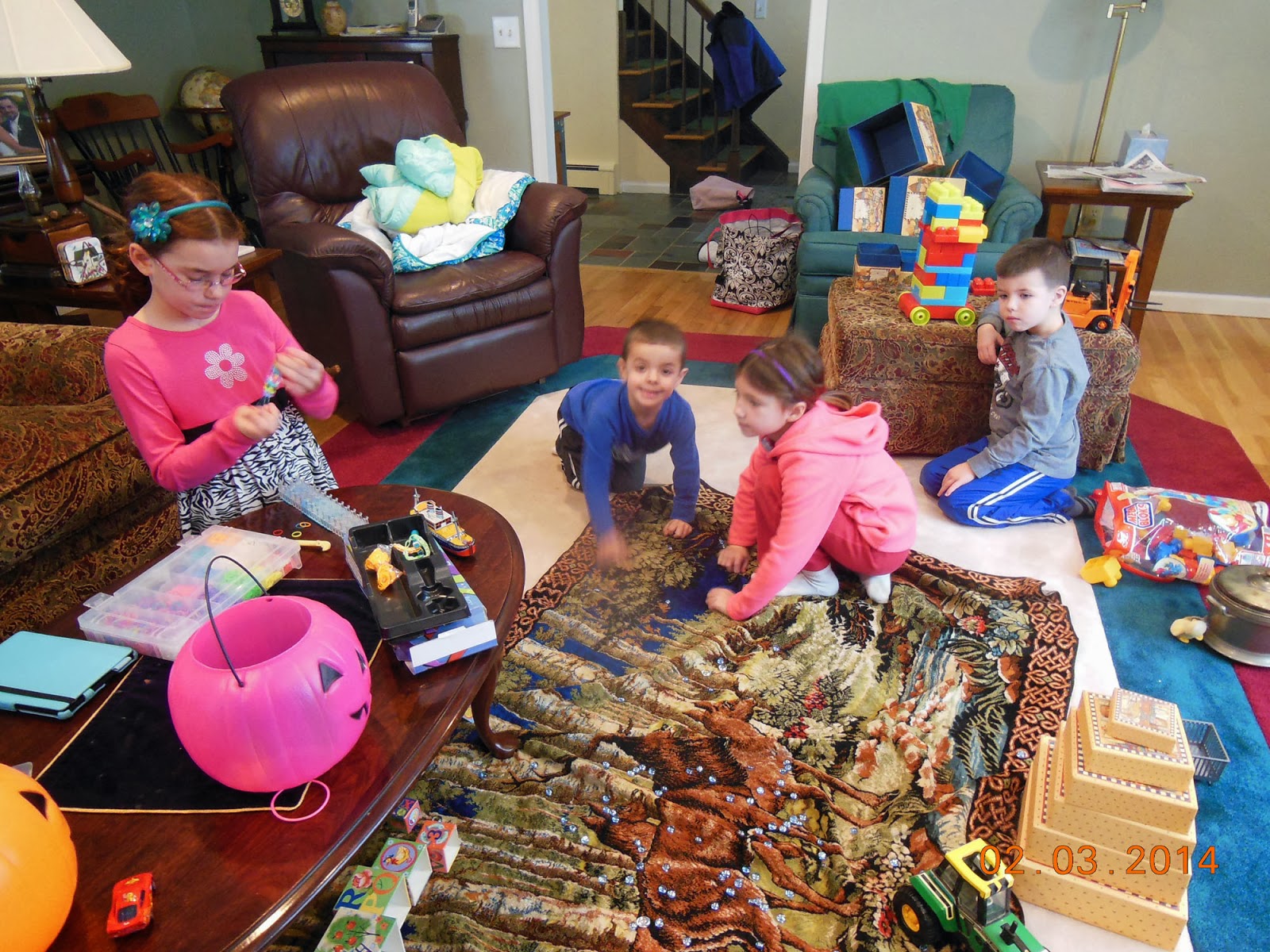 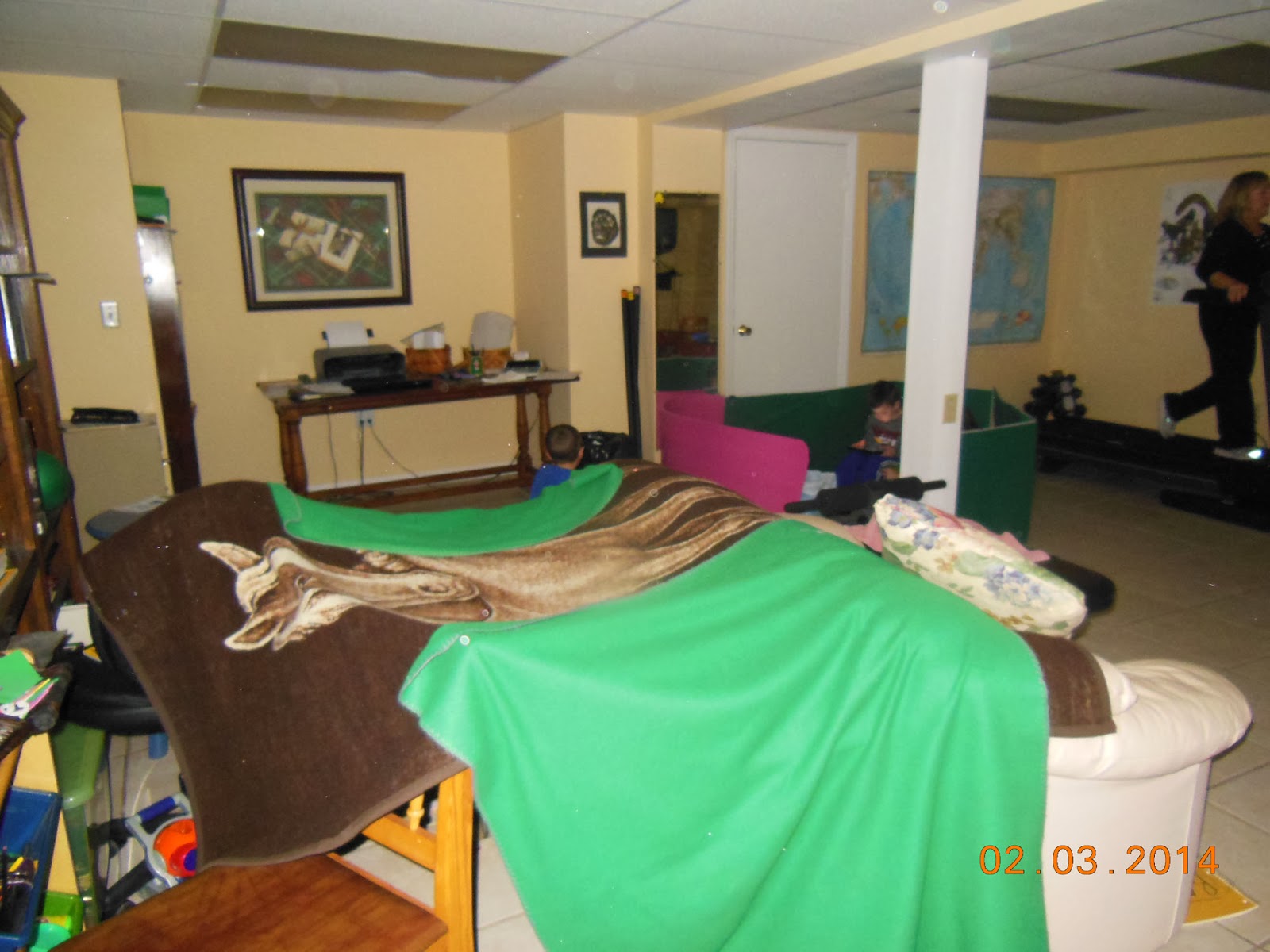 Posted by George Stockwell at 5:08 PM No comments: