While you are enjoying this day with your friends and family or getting some gardening done or just plain sitting around reading or watching TV take a few seconds of your time to  give a quiet thanks to those who made it possible for you to do what ever it is you're doing. 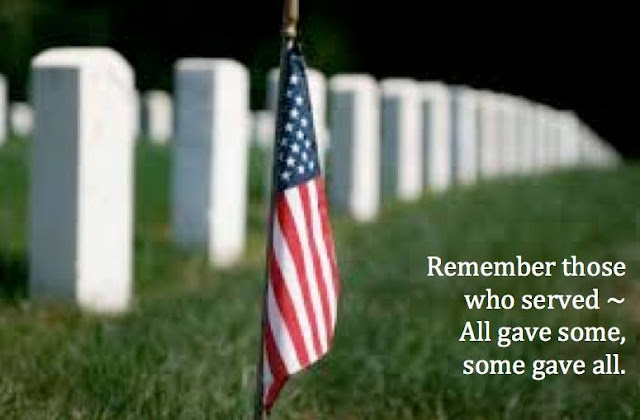 Posted by George Stockwell at 7:46 AM No comments:

End of the school year

Well, it's that time of year.  Year-end activities at the grand children's schools. So far we've been to three such events-two concerts and an event celebrating the year in writing called an authors' tea.

Next week we go to our fourth such event and that will probably be it for the year.  With school ending relatively early this year, baby sitting duties will kick in a little sooner than usual.

That's fine with me.  It gives me an excuse to avoid yard work-especially welcome given the early onset of heat and humidity.

georgeswebpage.com
Posted by George Stockwell at 7:23 AM No comments:

Back to the club

Due to a very affordable membership drive and Sandi's urging, we have rejoined Newtown Country Club.  NCC is a small but challenging 9 hole course with a bar and  restaurant.  Part of the membership fee includes a requirement to spend a certain amount of money every month at the restaurant.  It's not much and basically one dinner takes care of it. Plus the food is good.

That's the good news.  The bad news is the game of golf which I find to be quite difficult.  My scores-like my ball-are all over the place but I've been assured by several people that part of the reason is because I simply don't play enough.  Theoretically, the more I play, the better I'll get.

They may be right but I'm not optimistic. We'll see.  I'll keep you posted. FOOUUUR!!
Posted by George Stockwell at 7:24 AM No comments:

Get your facts straight

The other day  I received a long email from some long-time friends.  It was a forwarded message that had been viewed by many other people including other mutual friends.

It apparently originated from an ER doctor down south somewhere-I think North Carolina.  In essence the message reported an incident this doctor supposedly had wherein she was treating undocumented workers for something.  She went on to explain how even though the patients were illegal immigrants,  they were fully entitled to Medicare and full Social Security.  It then went on to say how awful this is and it's just plain wrong, etc etc.

After reading the message, I confess to being a little angry myself and wondered  how this could be allowed to happen so I  decided to dig into it a little more.  Guess what?  It's totally bogus.  After just ten minutes of looking at fact-checker type web sites, I learned that this thing has made the rounds over and over and the truth is that undocumented workers  absolutely are not entitled to medicare or social security.  If they obtained it fraudulently, that's another story and they should be subject to arrest but they certainly didn't get it legally.

The fact that the information contained in this message was blatantly false  epitomizes the lengths to which some will go to make an otherwise valid point.  It’s one thing to have legitimate concerns about important issues like undocumented immigrants.  It’s quite another to spread false information to make a point.  To do so diminishes the basic idea.
(http://www.factcheck.org/2009/03/social-security-for-illegal-immigrants).

I realize that this being an especially heated political season there will be many people-on both sides-prone to exaggeration.  But out and out lies are another matter.

My anger regarding the folks-whoever they were-receiving free treatment was transferred to the people who blindly forward this garbage.   It's one thing if you're just plain stupid but there's no excuse for otherwise intelligent people to accept as an article of faith some of the crap floating around on the internet or in emails.

I know it's just going to get worse.  If you don't believe me, simply watch any network morning show on any given day of the week.  It's pathetic.
Posted by George Stockwell at 10:37 AM No comments:

Don't forget to check out the photo gallery to my web site. There have been new pictures added. Plus be sure to click on the May almanac link.  You'll learn some interesting things about the month of May.
georgeswebpage.com
Posted by George Stockwell at 11:16 AM No comments:

The National Wildlife Federation runs a program whereby property owners can have their property certified as wildlife habitats.  There are no restrictions to the size or location of the property.  You can own one eighth of an acre to a thousand acres and it can be city, suburbs or out in the sticks.  It doesn't matter.

However your property does have to meet certain criteria.  Here are some of the things your property will need:
*Shrubs and trees to serve as food sources or shelter
*A water supply such as a bird bath, brook or pond
*Use of only organic pesticides and herbicides
*A 'safe' zone.  Somewhere that is generally undisturbed by anything not ordinarily in an animals habitat
*Presence of brush piles if possible but not necessary.  For example my grandsons and I built about 4 large brush piles in our back woods and in the winter when there's snow cover we're able to see evidence of animals using them for shelter.
*Bird feeders or suet stations

There's more but you get the idea.  I was able to certify our property without doing anything additional.

The designation of a wildlife habitat does not entitle the property owner to tax breaks or anything else for that matter except the satisfaction of knowing you're not doing any harm to the wildlife around you and are in fact helping it.  So if you're interested go to National Wildlife Federation web site and check it out. 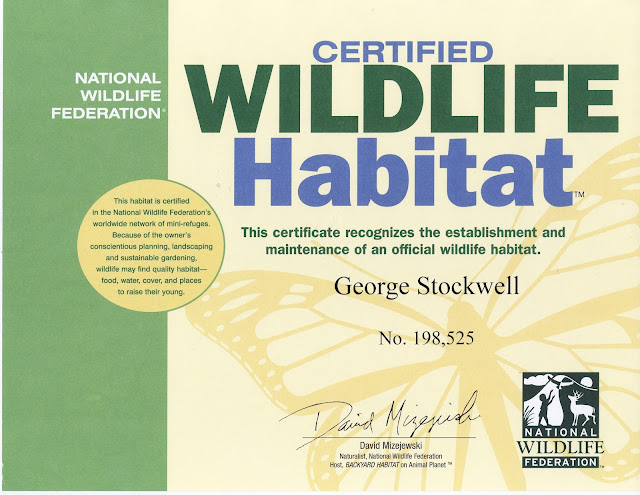 Posted by George Stockwell at 7:40 AM No comments:

The fact is people down here have been using these grills for years but apparently someone somewhere left a burger on a little too long thus resulting in a grease fire causing Lord knows how much damage.  Now, because of that one or maybe even a few people's carelessness we all have to suffer.  After all the fire marshal said so.

This isn't a situation unique to Florida.  I remember during my teaching days when every once in a while the town would have to allocate thousands-many thousands-of dollars toward upgrading the school to current fire codes even though a school hadn't burned down since the days of one-room school houses.

The same applies to residential properties too.  Once when I was trying to get a certification of occupancy for an addition we did to our living room, the inspector insisted on seeing all of our smoke detectors.  I had three. I had to buy 4 more-one for each bedroom-none of which had anything to do with the original project.

I regard this as massive over regulation.  It wouldn't be so bad except it's costly and inconvenient. I think I'll start a petition-unless of course the extra paper involved is a violation of the fire code!


Posted by George Stockwell at 2:58 PM No comments:

Every day should be Mothers Day for all you do. Happy Mothers Day, Ladies. And a special shout out to the three shown here. 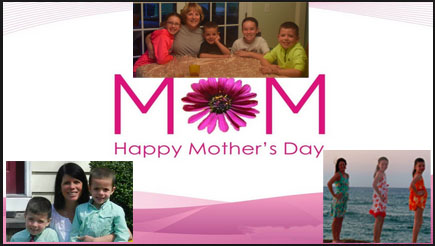 Posted by George Stockwell at 6:13 PM No comments:

A Note About Amazon Customer Support

We've been in Florida for two days now and Sandi needed a couple of books for her Amazon Kindle.  I usually do the ordering and arrange for the download.

When I went to do it this time I ran into the same problem I've had several times in the past.  We receive acknowledgement that the books were ordered but they don't appear on the Kindle.

Now comes  problem number 2:  When I finally found a number to call, guess where it was.  You guessed it-India.  Now I don't have a problem with India necessarily but what I do have a problem with is the fact I can't understand a word they're saying.  Over and over again I had to ask her to repeat herself.  I finally got the two books but she had no answer for me as to why it keeps happening.

Sandi's Kindle is a first generation reader.  I just got one and have never had a problem with it so maybe it has something to do with outdated software but they won't admit to that.

Zero for two, Amazon.  Not good.   Who do I write to complain?
Posted by George Stockwell at 8:09 AM No comments: