Today is the first day of school for Cole (3rd) & Nicholas (2nd).  Brooke (7th)  & Courtney (5th) go back tomorrow.  It doesn't seem possible that in just 5 short years Brooke will be a senior in high school.

This marks my 12th year of retirement but I still think back to those days when I was enthusiastically awaiting the arrival of my new class.  Even now I get in Cole & Nicholas's classes as much as I can.  Being around kids and helping them learn new things has always been enjoyable to me. It was the 'other' part of teaching duties that wore me out.

It's good to see the kids still looking forward to the start of another school year. Part of it of course is just plain boredom with the summer doldrums.  The other part is getting back into a routine and reconnecting with friends they might not have seen all summer although these days unlike when I was in school kids are around each other all year-not just the school year.

It will be September soon so our thoughts can't help but drift to the coming seasons.  Autumn will be upon us soon  and while some people dread it because of the coming winter, I actually don't mind winter that much.  Sure, it's cold-sometimes bitter cold-but is that worse than stifling heat and humidity?  Not to me.  I'll be ready.

Click here to see Cole and Nicholas on their first day of school. georgeswebpage.com
Posted by George Stockwell at 11:37 AM No comments:

Here's your question for the day: In spite of not being able to hold Bible studies in U.S. public high schools, should schools be required to teach the Quran (Islamic Bible) as Pres. Obama has urged?

What a question, huh?  The inspiration for it was a group email I rec'd from a very conservative friend of mine who was using it to of course make the point that Pres. Obama is a closet Muslim and a complete hypocrite.

Here's the thing.  The person who originated the message got it all wrong.  First, high schools across the country teach comparative religion classes wherein the Bible and Quran, among others,  are covered. Second, Obama is not a Muslim. He's Christian.  Third the message writer missed the point completely.  Isn't it better to make informed decisions out of knowledge rather than ignorance. That's the purpose of education and that's the point the president was trying to make (maybe he could have done a better job in that regard).

The real take-away message here is simple: Many conservatives, liberals, Obama haters, Obama lovers, whatever are going to bend the truth to fit their belief system no matter what you say or do to 'educate' them.  Not everyone is like that but enough people are to muddy the waters.  And wouldn't you know  it's that same group who are the loudest!

Witness the current republican presidential candidate. Enough said.  Back to lighter things next time.
Posted by George Stockwell at 4:22 PM No comments:

Are you ready for some FOOTBALL???

"Are you ready for some FOOTBALL?" blares out of my TV speakers when watching the CBS television station this time of year. It's not just about the NFL.   It also involves just about every town in the entire United States for kids (mostly boys) ranging in age from 7 to who knows what by the time they get through college.  So in the spirit of this great American fall ritual that we attended our grandsons' first football scrimmage last Saturday morning.

As I wrote in this space some time ago, I had my reservations about kids playing football.  There has been so much written about concussions that one can't help but wonder about the wisdom of allowing children to get out there and butt heads.  So it was with some trepidation that we attended this first game.

We were pleasantly surprised.  There was little if any actual head involvement that we could see.  The kids made clean tackles and their heads were well protected with well padded helmets.  The coaches were right there on the field as the plays were run and they acted immediately and appropriately when one of the players was shaken up on the play.

I've discovered subsequent research has shown that soccer is much more of a culprit in head injuries than football.   So we'll continue to go to the games and watch the kids enjoying themselves. But, believe me,  we'll be watching for signs of trouble too. After all, that's what grand parents do, right?

To see pictures of the kids as they participate in their various sporting events be sure to check my web site from time to time.   georgeswebpage.com.

You'll also see some good nature photos there too.
Posted by George Stockwell at 10:39 AM No comments:

Thank God for the Olympics-and other diversions!

Now on day 11 of the Olympics which I've been watching with a great deal of interest.  The bonus is that it's a welcome break from summer reruns, the heat  and politics all of which have been terrible.  (Every time I think Trump can't get any lower he surprises me. Oh well. Only about two and a half more months of it.)  At least the heat should break soon and new programming will kick in next month.

In the mean time we have NetFlix.  We've been hooked on a British series called Midsomer Mysteries.  Good stuff.  If you have NetFlix, try it.

I've also got plenty to ready.  I'm currently reading a book that was written some time ago and I recently discovered the author-Jane Smiley.  She's an excellent writer. The book is Moo.  I just started it and so far it's a very good read.  Try that too.

Later.
Posted by George Stockwell at 10:25 AM No comments:

Don't forget to check out the photo gallery of my web site.  Some new, interesting pictures have been added.   Check Brooke's web page as well.

Click here georgeswebpage.com
Posted by George Stockwell at 10:31 AM No comments:

Rest in Peace to my friend Jack Fitzpatrick who passed away last night. He had just celebrated his 93rd birthday. Jack served on the U.S.S. Alabama in World War II, the Greatest Generation. I had been visiting Jack for the past 8 or so years and he told me many stories of his time in service.

In civilian life Jack was a chauffeur for  Helen Keller .  He met many well-known people including Eleanor Roosevelt as a result of this.

At some point in Jack's life, his other brother died leaving three sons who Jack took on as his own. He often referred to them as his sons even though they were nephews.  All three boys attended New York Military Academy.  Only one of his nephews is still alive but very ill having suffered several serious strokes.

Jack's adoptive brother, 83,  lived with Jack pretty much his entire adult life and he cared for Jack during his later years.  He was with him every single day of Jack's 10 years at The Lutheran Home in Southbury.

We will all miss our conversations with Jack.  He was a great man.


Posted by George Stockwell at 7:43 AM No comments:

Summer activities drawing to a close

I'm on my way to Dickinson Park to watch the boys in their summer camp talent show.  Tomorrow is the last day for camp so for the next few weeks they'll be with me until school starts.

This is always a busy time of year for me since summer activities for the grand children are ending and school won't be starting for a while but it's all good times. Fortunately I enjoy being around my little "grands".

I'll be back with some stories of what we've been doing. I'm sure you'd rather read them than listen to me rant about politics, right?

Bye for now.
Posted by George Stockwell at 11:16 AM No comments:

Happy birthday to our son Peter

One of the few things I like about Facebook is the opportunity to embarrass our kids.  I recently posted this picture of our grown son to wish him a happy birthday today.  I suggested he probably still has his stuffed turtle.  Nothing like payback! On the other hand, I do hope he has a great birthday. 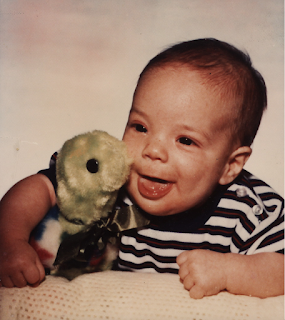 It's August already-the dog days of summer.  By the way did you know that the expression 'dog days' has nothing to do with how dogs are affected by summer heat?  It has to do with the appearance of the constellation Canis Major which is now visible in the night sky.

Anyway, click here to learn more about the month of August and to see recent photo updates as well  georgeswebpage.com

Posted by George Stockwell at 9:10 AM No comments: