Another Day to Remember 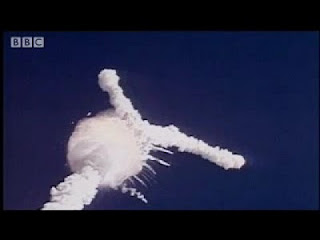 January 28, 1986
I was standing in front of my 5th grade class at Sandy Hook School.

One of the office clerks showed up at my classroom door and beckoned me over.

When I got there, she took me out in the hall and told me the awful news.

Word spread quickly among the faculty but we didn't say anything to the kids. And since this was way before the day of the cell phone and texting, they weren't going to find out until they got home.

I couldn't wait to get home myself. I went right to the TV, turned it on and followed the developments.

In the end the great physicist Richard Feynman explained how the 'O' rings had failed thus leaking highly combustible fuel.

So January 28 becomes one of those days when you will always remember where you were and what you were doing.

The third was of course the 9/11 terrorist attack which I wrote about before.

Unfortunately, these kinds of events always seem to be tragedies. On the other hand, there are plenty of good things to remember throughout the course of ones life--be they private or public.

Let's hope we have more of those kind.
Posted by George Stockwell at 7:26 AM 2 comments:

The Day With Courtney 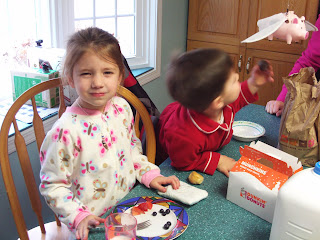 As you may have noted from previous posts, one of the games Courtney likes to play is 'doctor'.

This usually involves giving me an exam for a variety of ailments and then I inevitably get a series of shots to treat the illness.

There was a new twist to the game today. When she put her stethoscope in her ear, she had me put my hand on a play heart beat monitor.

According to Dr. Courtney, by doing that she was able to drain all the bad stuff from me into a special garbage can she had upstairs.

I told her it was amazing how much better I felt after the procedure!

Then, in addition to treating me, she offered to give me a haircut which apparently has now become part of her medical practice.

So the next time you go to your doctor, tell him/her that you think he/she should give you a haircut or perm because if he/she doesn't, you know where you can have it done!

It's always something new with Courtney.
Posted by George Stockwell at 4:42 PM 1 comment:

Yesterday it was Dick Cheney. This morning it was Glen Beck. Not so long ago it was George W. Bush.

All these guys appeared on the Today show peddling their books.

The only reason I watch Today even though I whine about it so much is because the local station I watch for news and weather is on the same channel. Both are hosted by NBC.

Matt Lauer is very tough to take but I like Meredith Vieira so I guess I'll stick with it.

I could switch to ABC but I can't take Good Morning America and the local station got rid of weatherman Geoff Fox so they're out.

CBS has sleazy Al Terzi so they're out.

Fox News has Imus which I do watch from time to time but he's got a lot of obnoxious people on too so all in all the choices are pretty slim.

Yes, I know. There are worse things to worry about. Actually I'm not worrying about this at all. It's just another one of my pet peeves.

There will be more. Stay tuned.
Posted by George Stockwell at 8:03 AM 1 comment:

Soooo...Joe Lieberman isn't seeking another term in the U.S. Senate.

Good bye and good riddance, Joe. You're a traitor to the Democratic Party and you're not even trusted by republicans either.

It was a wise decision since you didn't stand a snow ball's chance in hell of getting reelected. Now there's an opportunity for someone electable to get in.

See ya' and don't let the door hit you in the ass on the way out!
Posted by George Stockwell at 8:38 PM 1 comment: 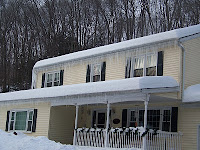 Ever see that show "Dirty Jobs" with Mike Rowe? It's a good show because it gives you a good idea of how nasty things get done without the viewer actually having to do it.

Well, I had two nasty jobs to do this morning. They're the kind of thing home owners have to do from time to time unless they want to spend a fortune hiring people to do them.

The winter weather and unusual amount of snow has created ice dams on the roof of our house. The problem has gotten to the point that there are some water leaks in the house as a result of the ice melting.

The partial solution is to shovel the snow off the roof so that it won't melt and then refreeze causing the ice dam.

So that's what I did-carefully because you don't want to damage the shingles. I didn't do this on the upper roof-just the lower one you see in this picture. That was bad enough.

The second job was to go for a long term solution. That is, make sure the attic is properly insulated and vented.

This is a nasty job because we don't have floors in our attic and it's not very big. There's exposed fiber glass insulation and A/C equipment all over so there was a lot of crawling in close, unpleasant quarters.

I salvaged a bunch of old shelving boards to lay down so I wouldn't step on insulation and wallboard. Then I ventured toward the eaves to make sure the vents were 'free'.

Problem was, when we had the house vinyl sided, the installers covered the soffit vents! That, I'm sure, is a big part of the problem.

Now I have to hope getting rid of the snow is going to be good enough and then wait until spring to see about the vents.

Ah, home ownership. It has its downside.

In the meantime, there's snow forecast for Tuesday. Where's that January thaw?
Posted by George Stockwell at 2:28 PM 3 comments: 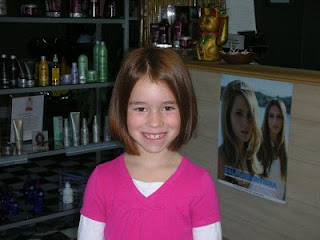 I started the week with my little pal, Courtney.

Then, I had an unexpected surprise yesterday. Grand daughter Brooke who will be 7 on the 17th came over to spend the day with me.

Thursdays are my day to run the errands I wasn't able to get to during the rest of the week but having a grand child or two doesn't prevent that because they're getting old enough to come along.

And that's exactly what Brooke and I did. First we picked up my chain saw chain from Newtown Power Equipment where Brooke took some time to admire the various tractors.

We left there to go to the mall to get some information about Sandi's iPad and shop for Brooke's birthday present. As we were driving along, I asked Brooke if she wanted some music. She said no, she'd rather I tell her stories about when I was a kid.

So I did--all sorts of stories about what my sister and I did on snow days, what we played with, what TV we watched (she was surprised we didn't have TV when I was her age) and what games we liked.

After our chores at the mall we had lunch at McDonald's.

We never did find what she was looking for so when we got home she asked me to get Google on the computer and she'd search for it. I confess this made me a little nervous. Google searches can be very effective but as we all know they can also be quite dangerous for young people.

I went to my settings folder on Google and set the filters to maximum. This is not foolproof but it goes a long way toward blocking unwanted images and content. I recommend the procedure to anyone who has children in their household.

Brooke and I spent the rest of the afternoon playing school. Then her parents picked her up.

It was the end of an altogether great day.

And today I get to be with my two little buddies!

It's great to be back from Naples--snow or no snow.
Posted by George Stockwell at 7:18 AM 1 comment:

A system out of control.

After the tragic shootings in Tucson, AZ, that killed several including a nine-year-old girl and the critical wounding of a US Congresswoman, how can anyone still doubt the fact that it's too easy to get a handgun in this country? Period.

Bull crap. While there are millions of harmless people who enjoy hunting and sport shooting (I'm one of them, by the way), the simple fact is any lunatic can get his hands on a gun.

Sure, there are gun control laws-here and there. But they are extremely inconsistent from one state to the next.

No politician in his right mind will take on the powerful National Rifle Association and its lobbies because there are too many misguided people out there who continue to ignore reality and insist it's everyone's right to own a gun.

They claim to have the Supreme Court and the Constitution of the United States behind them.

Wake up, America. Deal with this problem or things like this will not go away.
Posted by George Stockwell at 2:59 PM 1 comment:

Be it ever so humble, there's no place like home.

This week flew by. The weather was beautiful with temperatures in the 70s nearly every day and only one day of rain.

Yet, in spite of lousy, wintry weather, it will be great to get back home to our family.

So good bye until May Naples. Or if someone wants to come down in February or March, well, we'll see.
Posted by George Stockwell at 7:08 AM No comments:

Here we are at our condo in Naples, FL with some friends of ours. The temperatures have been ranging from lows of 60 or so to highs of around 75.

When we left CT, there was snow on the ground and there's more expected soon. In fact I should return to about 6 inches in our driveway which I'll have to clear right away.

But it's nice to get down here once in a while and as it happens this will be our last trip until May--unless someone in the family wants to come down sooner in which case maybe I'll go with them.

Golf tomorrow morning and then it's back home--and back to winter--Sunday.

But you know what they say--there's no place like home!
Posted by George Stockwell at 3:38 PM 1 comment: