A little over two years ago AOL bought a web site called Patch. Patch is a media company that specializes in on-line community issues. There are about 100 Patch sites in Connecticut.

About a year-and-a-half ago, the editor of Newtown Patch stumbled across the blog site you are now reading. She then viewed my personal web site (georgeswebpage.com).

Not long after that, I was at a picnic which was attended by the editor of Monroe Patch. He learned that I grew up in Monroe and asked me to make a weekly contribution regarding the 'old' days in Monroe.

Both of these columns are paid columns so my status is technically a freelancer.

As the months progressed, AOL was hoping to make Patch profitable or at least self sufficient. But progress has been slow so this week the Patch upper management cut the budget of local units.

As a result, the Monroe Patch editor had to eliminate my column. The good news is I'm still writing for Newtown Patch--for now.

AOL is in a bit of trouble. Fewer and fewer people think of it as the go-to web site when they first log on. Its purchase of Huffington Post drained away resources and Patch has yet to be profitable.

Some people in upper management have been leaving and the company is in turmoil so it's anyone's guess how much longer I'll be able to hang on as a freelance writer.

In the meantime if you haven't already, check out a Patch site about or near your community. I think you'll be pleasantly surprised.
Posted by George Stockwell at 7:54 AM No comments:

How's this for irony: Republican candidate Rick Perry is in trouble over his stance on providing education for children of illegal immigrants?!

Who'd a thunked it? A conservative-from Texas no less-taking an almost liberal-like view of such a controversial topic.

You have to give him credit, though. He stands up for what he believes in. Now let's see him squirm out of his view of social security being a Ponzi scheme.
Posted by George Stockwell at 10:29 AM No comments:

As anyone who has ever been in the military knows or even if you have some familiarity with matters regarding the military, you know that the armed forces are rooted in tradition.

Most traditions are difficult if not impossible to change. But two days ago the military turned one of its most solid traditions on its head--don't ask. don't tell.

In case you didn't know, it was once illegal for homosexuals to be in any branch of the armed forces. If it was discovered that a person was gay, they were immediately discharged.

Thus the philosophy of don't ask, don't tell. The military didn't ask specifically what your sexual preference was, and you in turn must keep your mouth shut about it.

During the two years that I was in the army (1964-1966) I knew of very few gay men. None of them was obvious about it and none of them ever bothered any of the other men.

We knew or at least suspected they were gay from where they hung out when they were off duty. Beyond that, they were just like everyone else.

It was never discussed and it never caused a problem.

I'm not sure how the 'brass' feels about the passing of this old, silly tradition. I suspect there are a fair number of old-timers who predict the ruination of the military.

That, in my view, is ridiculous. What difference does it make what a person's sexual preference is? So long as they leave others alone, it shouldn't change a thing.

If you want to talk about disruptive influences, how about the one that allows women to serve in combat units? You don't think that's caused its share of problems?

But that's a story for another time.

In the mean time, anyone who wants to serve his/her country may.
Posted by George Stockwell at 7:14 AM No comments: 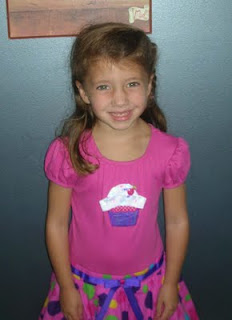 Yesterday, September 14th, was Courtney's 5th birthday. Courtney is the 2nd of four grand children. Her sister is 7.

Courtney started kindergarten this year but I still go up to my daughter and son-in-law's house every Thursday, sometimes to get Courtney off the bus and then a few hours later we pick Brooke up from school.

So Courtney and I spend a few hours together.

Today we played the usual game--school. Except this isn't your ordinary school. This is chore school. That's right C-H-O-R-E school.

Today I learned how to clean the kitchen table, vacuum the play room, wash dishes and dust.

How she came up with this is anyone's guess. Very likely she and her older sister Brooke invented the game together.

Next time I'll describe the games Courtney and Brooke's cousins Cole and Nicholas have invented for when I'm with them Mondays and Wednesdays.

You can always count on new adventures with grand children.
Posted by George Stockwell at 4:31 PM No comments: 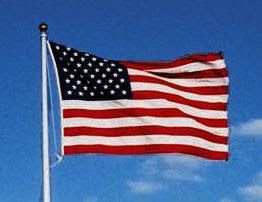 I'm sure you, like me, remember clearly where you were and what you were doing when you heard the news of the terrorist attack.

I was on my way to school only to discover it had been canceled for that day--not because of the attack. It seems a delivery truck somehow snagged the power lines going to the school and pulled them down.

I was told at the school to go to the central office to help phone parents to inform them of the cancellation.

It was at about 8:45 on my way home when I heard of the attack on the World Trade Center. I stayed glued to the TV for the rest of the day.

The second occasion is in marked contrast to the first. I was at my 50th high school reunion last night. There were only about 52 people in our class so it wasn't a big crowd but there were surprisingly more people there than I anticipated.

It was a very nice evening and fun to reconnect to all those 'old' friends of so long ago. We plan to do it again in 5 years which will put us well into our 70s. We'll see.
Posted by George Stockwell at 7:13 AM No comments:

Profit over honor. Never a doubt.

Yet, observe. Every store is open. No holiday for those workers.

I remember a time when everything except health care professionals and emergency workers was closed.

No longer. Profit is more important that honor. I say do away with the holiday. It has lost its meaning.
Posted by George Stockwell at 11:07 AM 1 comment: 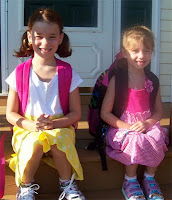 Watching Brooke & Courtney board the bus yesterday brought back a lot of memories of our own children as they started that first day of school.

Later that day, Courtney and I picked up Brooke from school. They both reported having a great first day.

Hope the whole year is great for them.

It all also reminded me of my teaching days when on that first day I'd greet a lot of nervous students.

Days like that are part of the things I continue to miss even after 7 years of retirement but I'm happy to report I've moved on to equally exciting endeavors.

All of which takes me to my favorite piece of advice for anyone anywhere: stay calm and carry on.

Where have I been for almost a week? Dealing with Hurricane Irene. That's where.

Actually, the level of discomfort and inconvenience caused by the hurricane was very minimal for our household. Incredibly, we never lost power but we did lose cable (Internet, TV, Phone). But even there, I was able to keep up with what was going on by using an iPad that had 3G capability.

For the uninitiated that means I could connect to the internet or check my emails by using a cell tower. Oh, I had my cell phone too.

So, all in all, we were in great shape. But there were a lot of folks who weren't so lucky. You can read my upcoming column on Newtown Patch to learn more.

In the mean time, cheer up. In less than three weeks it will be Autumn and then before you know it hurricane season will be over...but then the snow starts.

Posted by George Stockwell at 7:15 AM No comments: