There's hope for the U.S. yet

Well well well.  The Supreme Court of the United States (SCOTUS) has finally joined the rest of us here in the 21st century.  For a while it looked like we were going further and further back in time.

In all fairness it wasn't the whole court that was bent on living in the past.  Just the four conservatives and a fifth justice who is usually considered a 'swing' vote but lately he's been swinging right.

With last week's rulings it looks like there just might be hope.  First, the Affordable Care Act was given their support.  Second, it was determined that all states must allow people to marry whomever they want.

Definitely progress.  Too bad it didn't bite the bullet (no pun intended) with gun control.   Also its ruling regarding corporate political donations and independence is troubling.  But, hey, we have to take things a little at a time.

Now we need Scalia and Thomas to resign before Obama leaves office and then things will improve dramatically.

Note:  I won't be posting here again until after July 5th.  Taking a little break.  See you then.
Posted by George Stockwell at 7:12 AM No comments:

Take it down-or let it fly. Which should it be? 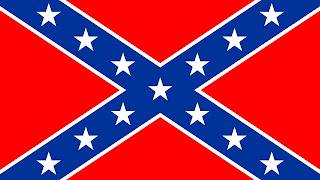 What this is is the flag of The Confederate States of America.  As a result of the recent tragedy in South Carolina there's a bit of a storm revolving around this flag.  It seems the flag flies over South Carolina's state capital.  According to my information it also flies over the Alabama and Mississippi capitals.

Everyone has their own idea of what this flag means to them. Many people (mostly southerners I presume)  regard it as a symbol of independence, freedom from tyranny and self regulation-or at least that's what their politicians and many citizens say it stands for.

Here's what I think it means: insurrection, racism and ignorance.

The Civil War is over.  The union endured.  State politicians have no business flying this flag publicly and especially not at a state capital.  By doing so they're sending the message that they embrace the values embodied in it.  It needs to come down.  Do you see the German swastika flying at state capitals or in Germany anywhere?  Of course not.  Take it down.  Now.
Posted by George Stockwell at 7:39 AM No comments:

Well, I got my new hedge clippers thanks to my son and daughter.  They must have over heard me say my old ones finally bit the dust.

The old joke about fathers receiving ties never applied to me.  I never once received a tie-or a mug for that matter.

Actually I long ago stopped giving gift ideas for Fathers Day.  Just having the opportunity to be with the family for a day is fine with me.

I think most men my age think the same thing.

Next up?  Next Sunday we leave for the Dominican Republic.  Should be a great trip.
Posted by George Stockwell at 5:49 AM No comments:

Another school year draws to a close

It was exactly 11 years ago today that I bid farewell to a 32 year career in public education.  After I retired I continued to sub and even now I continue to get in the school to volunteer in my grand sons' classes as much as possible. It happens to be the same school where I taught. My grand sons finished kindergarten and first grade respectively. My grand daughters are headed into 4th grade and 6th grade respectively.

As part of the year-end activities we got to go to Cole & Nicholas's authors's teas.  We went to Brooke's end-of-year performances of two Shakespeare plays (That's right.  Fifth graders doing Shakespeare! My fifth graders never did Shakespeare, that's for sure!).  And Nicholas graduated from kindergarten.

Courtney just finished third grade so she doesn't have graduations nor does her class apparently do Shakespeare but she does have a piano recital coming up so that's the next thing we have to look forward to.

Time has a way of passing so much more quickly than we expect.  It's amazing to me to think we no longer have preschool grand children.   They're growing up so quickly but certainly there are no regrets.  People grow up. It's as simple as that. The things we celebrate now are all good things and the things we're going to be celebrating in the future will be just as good.

My younger grandson's class sent me the letter you see posted below.  I hope to get many more similar to this as time goes on. 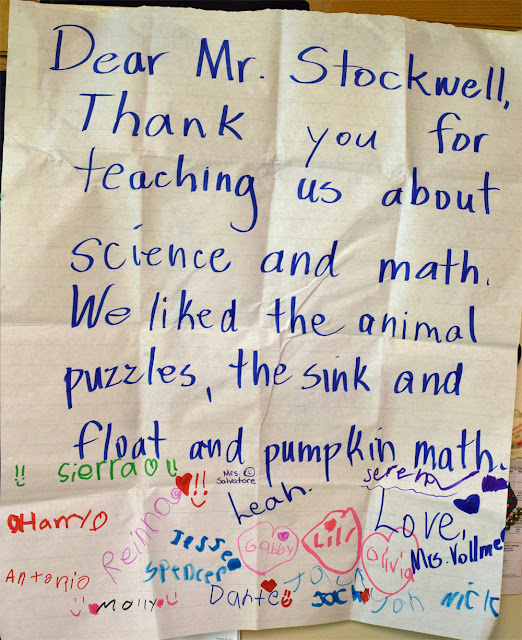 Posted by George Stockwell at 4:48 PM No comments:

The Art of Racing in the Rain

I just finished reading a book passed on to me by my daughter and son-in-law.  It's The Art of Racing in the Rain. It's about a man and his dog and it's narrated by the dog.  There are many racing metaphors sprinkled throughout the book but that's not really what it's about.

I don't want to spoil it for anyone so I won't say more except that there is more information on the internet and Amazon.com's website.  The book was on the New York Times fiction best seller list for three years.  Authors and publishers are ecstatic if they can be there a few weeks!

It's a great book about life and the speed bumps we all eventually endure.  You don't have to be a dog lover or a racing fan to enjoy it.  But if you are, that's a bonus.

It's out in paperback.  Read it.
Posted by George Stockwell at 7:28 AM No comments:

A Visit with Jack

Yesterday I visited my friend Jack.  Jack is a 92 year old World War II veteran who lives in a local nursing home.  Jack has a lot of complaints about the nursing home.  Many of those complaints are justified while some are just because he might be in a grumpy mood.

One thing however is true.  There is a great deal of turnover in the help at the facility and too many of those people are not trustworthy.  By this I mean very often a resident's valuables go missing.  Sometimes it's because another resident took them but other times it's because of the help.

Take for example what happened the other night.  Jack got up to use the bathroom.  He's supposed to ring for assistance but he wants to do things on his own.  Well, sure enough, he had a dizzy spell, fell and banged his head.  The ambulance was called and he was taken to the hospital.  Later that night he was returned to the home and put in bed.  The next morning he was OK but he couldn't find his watch.  He remembers on of the night people removing it from his wrist but the next day no one knew anything about it.  It's a possibility someone absentmindedly put it in her scrub pocket but she's been out so they haven't been able to check.

It's this kind of thing that happens with great frequency.   Another example-I often bring Jack a large bag of those small Hershey chocolates.  He loves chocolate.  The problem is he would have one or two, put them in his night table drawer and the next morning most of them would be gone.  The night people like chocolate too.

It's very difficult to get good help in homes like this.  They pay minimum wage and the training is insufficient. The reason for this is to keep costs down but because of it, the residents suffer.

So what's the solution?  Diligent family.  Fortunately Jack's brother is on top of all of this but there are many others who have no family or whose family doesn't care.  It's not even possible for a friend like me to intervene because friends have no legal rights over a resident's care.

It's quite a problem and even worse from one state to the next.  Getting sick when you're old is not fun.
Posted by George Stockwell at 4:12 PM No comments:

This past weekend was very busy given the fact that it was our daughter's birthday Friday followed by two days of grand children sports and yard work.  In fact this is a generally very busy time of year.  Between sports and end-of-year activities as school winds down for the summer there isn't much time for anything else.  But in no way is this a complaint.  It's all good stuff.

As I reflect on the lives of our children and grand children, I'm struck by how different it is for them compared to when I was a child many years ago.   For my sister and me the only organized sporting events we were involved in were our daily trips on our bicycles to a local field where we played baseball with other neighborhood kids.  Forget about school or town sponsored sports.  They simply didn't exist.

End of year school events were also different.  For us there simply weren't any.  For our grand children and even their parents there are a variety of things going on, i.e. concerts, field trips, field days, authors's teas, fairs of various kinds, etc.

In many ways kids today have far more challenges than we did.  Social media alone can turn into a mine field for teens.  But in other ways they're much more fortunate.  There are many more opportunities for them to enjoy  than what was available for those of my generation.

From time to time I hear people offer the possibility that maybe kids today are too busy.  Maybe they should have more unscheduled time in order to create games of their own instead of everything being planned for them. To me both sides of the issue have good points.  During my teaching days there were many times when my students' out-of-school activities interfered with school.

The bottom line is it's all about parenting.  Parents are the ones in charge so they're the ones who must set the standard and act responsibly.  Sure, give kids opportunities but let's also give them time to be kids.
Posted by George Stockwell at 10:45 AM No comments:

June already.  A beautiful month.  Nice warm weather.  Flowers blooming.  Kids getting ready to get out of school.  The brutal winter just one more bad memory.  It's a great time of year. There's a full moon tonight but we have a thick cloud cover here in the northeast so you'll have to wait until tomorrow night to see a slightly waning moon.  You won't notice.

Have a great month. 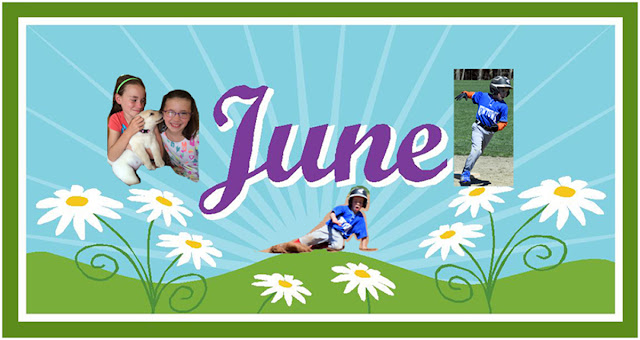 Posted by George Stockwell at 7:36 AM No comments: