1. Remember the fuss the republicans put up when Pres. Obama issued those executive orders?  Well, guess what. Trump has written more in his first week in office than all of Obama's combined. Now where's the fuss.  They're such a bunch of hypocritical phonies.

2. The attacks on the press  by Trump,  his chief of staff and others is troubling.  Freedom of the press is the bedrock of a democracy.  So what can you do?  Write, call and email your senators and representatives. If enough people do it, you'll get results.

Thus endth my rants for the day.  More positive posts to follow.
Posted by George Stockwell at 11:13 AM No comments:

Some time ago I posted a piece describing my experience with Verizon.  The long and short of it was that I was getting charged a monthly fee for an account that was no longer active.

Representatives at my credit card company assigned a case number and assured me they'd look into it and have the charges discontinued.  They didn't and the charges kept appearing.

Today I called Verizon direct.  The individual I spoke to spoke clear, understandable English and understood the problem completely.  I was returned all the money I was charged and the account was closed.

So often in this spot I post stories of profound incompetence and frustration.  I'm happy to report a good outcome for a change.


Posted by George Stockwell at 4:06 PM No comments:

As you may or may not know I am on Facebook.  My daughter got me started several years ago.  Anyway, most of my 'friends' are former students & colleagues.  There's also a smattering of various relatives, i.e. nieces, nephews, cousins, children and their spouses and families, etc.  Very few are actual 'friends' in the traditional sense of the word.

So the other day one of my 'friends'-actually a woman about 45 years old who is a former student-posted a picture and accompanying comment celebrating Trump's inauguration.  Against my better judgement, I replied with the following question/comment:

"Interesting. So here's my question and I ask it at the risk of offending someone but here goes: How can ANY woman with an ounce of self respect support a pig like this who openly brags about sexually assaulting women? I admit I'm old fashioned because, well, I'm old. So help me out. What are you thinking...and I apologize in advance to anyone who's offended."

Well!  I sure opened a can of worms with this.  Not only did this person's friends attack me but her adult children did as well.  One person out of the many agreed with me but we were definitely in the minority.

My reply was an apology and the suggestion that we should probably forget the whole thing and move on.  I then blocked her from future news feed because I'm sure the bombardment will continue indefinitely. (Blocking is one way of hiding a person's posts without 'unfriending' them.  It's all very complicated and Facebooky stuff).

So what's to be learned here.  Well first and foremost something I've always known was proven once again: Human beings have a remarkable way of ignoring what doesn't fit with their belief system while letting in that which does.  In psychology it's formally called cognitive dissonance.  It works every time and I'm probably guilty of it from time to time myself.

Anyway, I've decided to return to the mantra that has served me well for many years: Keep calm and carry on!   What could go wrong?
Posted by George Stockwell at 8:16 AM No comments:

Goodbye, President Obama, and thank you.

Goodbye, Mr. President, and thank you for your leadership for the past 8 years.  Over that time you have managed to overcome blatant hatred, bigotry and racism to help end one of the worst recessions in American history.  America now has the lowest unemployment rate in years and a recovering economy.  In addition to this you have kept us safe from foreign attack and you presented to the world an America who remembered its heritage of welcoming the persecuted and down trodden. The Affordable Care Act (an act that was never meant to be a finished product, rather a first step in the right direction) has enabled millions to obtain the health insurance they need.  (They will soon be at risk of losing it.)

In spite of having to deal with a Congress who vowed to resist every move you've made in spite of how good it may have been you managed to do all of this with unbelievable dignity, class and grace.   You have been a beacon of rationality and sanity in the face of hatred and exclusion.

And now we face four years (dare I hope not) of a level of  division, hatred, xenophobia, misogyny and bigotry that we have never seen before.  God help us.


Posted by George Stockwell at 8:08 AM No comments:

Although the year turned 17 days ago, here's a belated Happy New Year wish.
May the new year bring you happiness and health.

Now this for a little perspective:

The year is 1917 "One hundred years ago."
What a difference a century makes!
Here are some statistics for the Year 1917:
The average life expectancy for men was 47 years.
Fuel for cars was sold in drug stores only.
Only 14 percent of the homes had a bathtub.
Only 8 percent of the homes had a telephone.
The maximum speed limit in most cities was 10 mph.
The tallest structure in the world was the Eiffel Tower.
The average US wage in 1910 was 22 cents per hour.
The average US worker made between $200 and $400 per year.
A competent accountant could expect to earn $2000 per year.
A dentist $2,500 per year.
A veterinarian between $1,500 and $4,000 per year.
And, a mechanical engineer about $5,000 per year.
More than 95 percent of all births took place at home
Ninety percent of all Doctors had NO COLLEGE EDUCATION!
Instead, they attended so-called medical schools, many of which were condemned in the press AND the government as "substandard."
Sugar cost four cents a pound.
Eggs were fourteen cents a dozen.
Coffee was fifteen cents a pound.
Most women only washed their hair once a month,
And, used Borax or egg yolks for shampoo.
Canada passed a law that prohibited poor people from entering into their country for any reason.
The Five leading causes of death were:
1. Pneumonia and influenza
2. Tuberculosis
3. Diarrhea
4. Heart disease
5. Stroke
The American flag had 45 stars ...
The population of Las Vegas, Nevada was only 30.
Crossword puzzles, canned beer, and iced tea hadn't been invented yet.
There was neither a Mother's Day nor a Father's Day.
Two out of every 10 adults couldn't read or write.
And, only 6 percent of all Americans had graduated from high school.
Marijuana, heroin, and morphine were all available over the counter at local corner drugstores.
Back then pharmacists said, "Heroin clears the complexion, gives buoyancy to the mind, regulates
the stomach, bowels, and is, in fact, a perfect guardian of health!" (Shocking?)
Eighteen percent of households had at least one full-time servant or domestic help...
There were about 230 reported murders in the ENTIRE U.S.A. !
I am now going to forward this to someone else without typing it myself.
From there, it will be sent to others all over the WORLD all in a matter of seconds!

It is impossible to imagine what it may be like in another 100 years.
Posted by George Stockwell at 3:11 PM No comments:

Don't forget to check out georgeswebpage.com for recent updates.  Lots of good pictures and January's almanac.

Click 'contact me' in the navigation bar if you have ideas or suggestions. Thanks.
Posted by George Stockwell at 8:33 AM No comments:

For the past two weeks we had been at our condo in FL.  We got in last night after a long, miserable drive from the airport.  Never again will I book a trip where we return on a Friday evening during rush hour!

We went directly to a restaurant because we had absolutely no food in the house and there we ran into my son, daughter-in-law and two grand sons.

So now it's back to cold CT with a sinus infection for which I'm taking medicine. Our next trip won't be until April or May.


Posted by George Stockwell at 3:52 PM No comments:

Every Thanksgiving the entire family goes to our condo in Naples.  That's 6 adults and 4 children in a 3 bedroom unit.  As you can imagine the sleeping arrangements are challenging.  Each of the two guest bedrooms has a queen size bed and we were adding a queen size inflatable mattress for the kids.  It made things very tight in both rooms.

We determined that the solution was to go up rather than out so we got two sets of bunk beds which fit very nicely.  The grand kids are very excited about them. 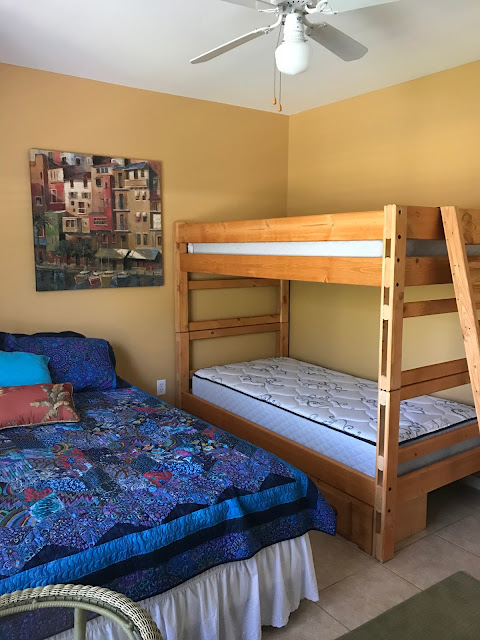 Posted by George Stockwell at 4:38 PM No comments:

Four years ago this month when we were in Naples we were often asked by sales people or restaurant staff where we were from.  When we said Sandy Hook, there would be a strong reaction because the tragedy of Sandy Hook School was only a few weeks old.

As expected,  over the years as we were asked the same question the reactions become fewer and fewer.  Well two days ago as we were doing the paper work for a furniture purchase, the salesman didn't even bat an eye when he learned we were from Sandy Hook.

Naturally that's to be expected, especially for out of town folks.  For example suppose you met someone who said they were from Columbine, CO.  You may think about it for a split second and then move on.  And that's the point.  Move on.


Posted by George Stockwell at 11:48 AM No comments: