Tear them down or keep them? That is the question.

In the last post I told you about a controversial issue of a somewhat local nature.  Well, here's another on a national level.

Actually this one has been around for some time but recently flared up in the news again.  It involves the issue of whether or not confederate monuments should be left standing or torn down.

The reason this has come up is because we are now living in a time of significant intolerance, hatred and racism.  Never since the race riots of the 60s has it been so bad.  What could be the cause of that?  I think you know where I'm going with this.  The answer is that we have the great misfortune to be led by the chief racist and white supremacist of all time-Donald Trump.

Trump has spent the last 3 years going around the country talking, tweeting and ranting thereby inspiring his base to commit unbelievable acts of violence and hatred but, hay, that's just Donny being Donny.

Anyway, as soon as the nation dumps Trump things will settle down until the next round of arguments.

I'm not sure where I stand on the issue.  Both sides have some merit to what they're saying.  Let's see how it plays out. 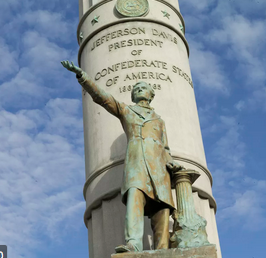 Posted by George Stockwell at 4:18 PM