Want to be a farmer? I didn't think so.

I'm reading a book entitled "Some Luck" by Jane Smiley.  It's about a family of Iowan farmers and it covers a period of about 25 years.

There are a number of themes that thread their way through the book i.e. self reliance, loyalty, individuality, struggle and hardship, the value and rewards of hard work,  but one of the most revealing to me is that dealing with the trials and tribulations of farming.

It's amazing to me that anyone would want to do it.  Your dependence on the weather alone is enough to make one run for the city or suburbs.  Indeed there are fewer family farms every year-partly due to the rise of large agribusinesses.  It's impossible to compete with them.  But the lure of owning and working your own land is a powerful force and it's especially strong for those who were brought up on farms who just don't want any other kind of life.

I've always had enormous respect for farmers.  When I was a boy I spent part of every summer on my uncle's farm.  He started out as a dairy farmer and later became a chicken farmer.  I would get up every morning with him and follow him around doing the many chores of the farmer.  I actually liked it-especially when he let me drive the tractor!

Farming is an extremely important part of the development of America.  Was a time when the farm was the hub of the community.  In fact my grand daughter is going on a school field trip soon to Sturbridge Village, MA.  Sturbridge Village is set in the 1830s. She will see all kinds of craftsmen doing their work and she will learn that each of them is also a farmer or one who is working long enough at their craft to have enough money to own a farm.  The farm in New England at that time was  everything.

Gone are those days-probably forever-and with them an important piece of American culture. I think that's a sad thing. 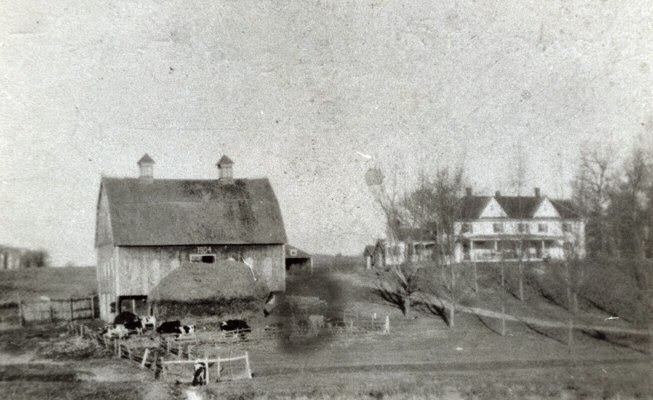 Posted by George Stockwell at 7:32 AM