Kids are amazing, aren't they?  Just think about their imaginations.  For example the rules they make up or bend when playing games is beyond anything any adult would dream of.  I guess it's the Steve Jobs, Bill Gates and Oprah Winfreys of the world who got as far as they did because they refused to let rules stop them when they grew up.

Take for example the game Nicholas and I played today.  Nicholas is almost 4 and he likes to play floor hockey.  We use actual hockey sticks, a little red ball and play in the carpet (ice) in the playroom he shares with his brother Cole.

So here are the rules for today's game:
1. When he says hut, hut, hut, I get one strike.
2. If I cheer (which I do just as an automatic reflex) when I score, I go to timeout.  Only he's allowed to cheer.
3.  When he says 'zamboni time' that means he gets the vacuum cleaner and smooths out the carpet (ice) while I go to his room with my coach.
4.  My coach and I are not allowed to talk to each other.  If we do, I go to timeout.
5.  When taking shots, I have to put it in from the front but  Nicholas can go around the back if he wants to.
6.  If the puck (ball) goes onto their letters and numbers matt, it's out of bounds in which case he gets a free shot no matter who hit it out of bounds.

There are a couple of more 'rules' which I don't remember because I spent so much time in timeout, we didn't actually get to them.

And so it went.  Hockey according to Nicholas.

Oh, on top of  all of that we had to play in the space created by both boys so there'd be room.  Check it out.  It took the rest of the morning to clean up the mess. 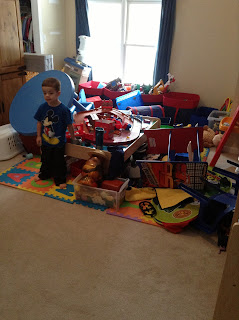 Posted by George Stockwell at 6:22 PM