What Global Warming? Who needs science? 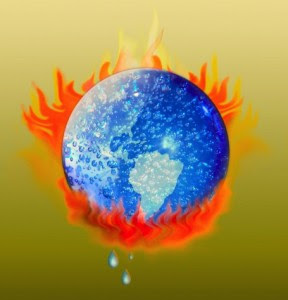 All winter long as the snow fell harder than ever and meteorological records were shattered we could hear our republican friends and their fan clubs, conservative pundits, rant about the fraud of 'global warming'.

They used this unusually difficult winter as evidence that science and its own fan clubs, liberals and democratic politicians, was a bunch of bull.

With their comments dripping with disdain and contempt for the scientific community, the newly elected republican Congress decided that one of the things that should be cut from the budget is government grants to all things scientific.

What a pack of idiots! They give the concept of ignorance new meaning.

Either they haven't bothered to research the issue enough or they simply don't care but if they did, they would discover that one of the most well established causes of dramatic climatic changes is exactly the thing they dismiss--global warming.

The key is 'global'. That's exactly how you have to think. It requires people to adopt a world view but they don't understand this. They continue to live in their little, narrow minded, myopic worlds.

This nation will pay big time for the mistakes made in the last election!
Posted by George Stockwell at 7:32 AM

How come I keep wanting to say "Amen" after posts like this? Apparently they haven't seen that movie (and I can't think of the name of it right now). Typical, Hollywood is more in the know than our congress.
kt