It seems we have reached another sad milestone..

The other day when it was raining enough to prevent outdoor work I decided to get rid of some clutter I'd been tripping over for some time.  In this particular instance it was a stack of National Geographics that kept falling off the shelf where they were piled-seven years worth to be exact.  That makes over 80 issues.

I've been receiving National Geographics since I was about 10 years old.  My blessed Aunt Ann gave me a subscription to them one year and I never let it drop.  That's about 60 years worth of magazines.

I don't know what happened to them when I was little but when I started college and teaching, I saved them as a reference.  During my teaching days I'd bring them to school and the kids would look at them and use them to cut out pictures for projects.  Even my own kids used them from time to time.

That was then and this is now.  With the exception of some occasional interest by grand children there just isn't the same level of interest.  I've contacted schools and libraries and no one wants them.  I even reached out to a few nursing homes and assisted living facilities thinking the senior residents there would appreciate them.  I posted a message on Facebook asking for suggestions.  A few people shared the message with their friends but other than that I haven't been contacted by a single person.

So here I am with a bunch of magazines, taking up space and no apparent purpose.  Yet I can't bear to toss them.  I'm determined to find a good home for them.

Any ideas?  If so, contact me at george.stockwell@gmail.com.
Thanks Posted by George Stockwell at 9:14 AM No comments:

Since spring is officially here and the weather has warmed considerably, it is time to consider the list of outdoor tasks that await me.

1. Leaves, leaves and more leaves
2. Prep garden area
3. Cut, split and stack recently acquired wood by driveway (over a cord)
4. Cut up the stuff that has fallen in back woods and get it to the wood pile (probably about half to three-quarters of a cord
5. Work on cellar Bilco doors to stop water entering through them into basement
6. Pressure wash house
7. Charge tractor battery and get it started
8. Prep snow blower for summer storeage
9. Repair stone walls
10. Clean up brush that fell over winter
11. Relax on front porch and watch birds

That should keep me busy for a while.


Posted by George Stockwell at 7:00 PM No comments:

The Way It Should Be

Congratulations to President Barack Obama on his historic trip to Cuba and representing the United States of America to the rest of the world in the fashion it should be- kind, willing to listen, accepting-as opposed to hateful, bigoted, hostile and exclusive. We do not exist in a vacuum.  We must learn to live with others.
Posted by George Stockwell at 5:19 PM No comments:

Mother Nature is still in charge

By the calendar it is spring but over night Mother Nature sent us a little reminder that it is after all only March and she is, as always,  still in charge.  We woke up this morning to a beautiful snowfall. And it was,  in my view,  the best kind of all-nothing stuck to my driveway.  The best of both worlds-very nice to look at and nothing to snowblow or shovel.

The forecasts for the coming week look very nice but lest we get too complacent, let me remind you we've had some big snow storms in April in the past so I don't think I'll be putting the snowblower up just yet.  One never know. 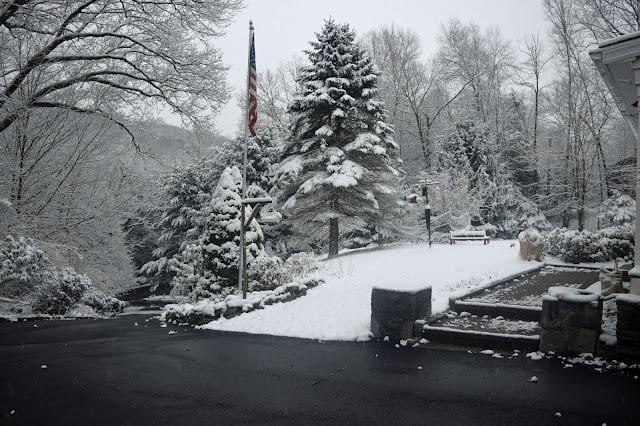 Posted by George Stockwell at 11:40 AM No comments:

I used to number my pet peeves but I ran out of numbers.  Anyway, here's my latest-school buses.  Well, not exactly school buses themselves. After all we all know when school's in session, they're going to be out there every morning and afternoon like clockwork.  Plus, very often the driver sees a long line of cars behind the bus so they try to be considerate by pulling over and letting traffic pass.

No, the problem is not the bus, although it's related.  The problem is all these mothers (yes, it's mostly mothers. Fathers say goodbye and walk away). Why is it necessary for the mother of especially the little ones to stand there and carry on a discussion with the poor driver who keeps trying to close the door but mom continues to rattle one?  It's like they're experiencing  some sort of separation anxiety.

By the time the driver has hit his/her third stop, everyone is already late and the cars are lined up behind the bus.  For heaven's sake, give the kid a hug, kiss him/her on the forehead and then go somewhere.  What could you possibly need to know or tell the driver at this point in the year?

Thus endth my rant for the day-but then again the day is just starting so stay tuned.
Posted by George Stockwell at 8:39 AM No comments:

Twice a  year we have to mess with our clocks-either ahead or back-although with the satellite/digital age upon us it actually gets easier because it's done automatically.  But for those of us with analog devices, it's still a pain in the neck.  For example in my particular situation I have my truck clock, three bedroom clocks, three conventional face clocks, the microwave and oven clocks and the most important of all, the coffee maker so that coffee is ready for when I wake up-6:30 on the dot.

All other clocks (Sandi's car, cable boxes, iPads, iPhones and computers) take care of themselves.

Depending on what source you consult,  the  tradition of changing clocks started either during one of the wars in order to extend daylight time for the war effort or in the day of Benjamin Franklyn who did it for pretty much arbitrary reasons.

If you talk to a farmer or a native American you'll be told it makes no difference whatever.  Whatever work there is to be done will be done between the time the sun comes up and stopped when it gets dark.  Who cares what the time is which of course makes complete sense.

If I had to choose one over the other for a permanent arrangement, I'd take the Daylight Savings Time that's coming up.  The only problem with that is there would be lots of middle and high school students waiting for the bus every morning in the dark.  I guess the solution to that is to start school later.  There are in fact districts experimenting with this because research is showing over and over that kids need that morning sleep and when they're rested they of course learn better.

Whatever the case may be, don't forget to set your clocks forward Saturday night-unless you're a purest and you get up at 2 A.M. Sunday morning to do it!
Posted by George Stockwell at 10:30 AM No comments:

Two gun-related items have been in the news lately.

The first was a piece reporting a controversy presently brewing between police and those who choose to carry their guns.

It seems the police are asking that laws be changed so they can ask to see a carry permit without there necessarily being a cause for suspicion.  The carriers are upset with this and regard it as an invasion of privacy.

The second issue to make it in the headlines involves the suggestion that teachers carry firearms while at school.  The theory is that if there another situation as the one that happened in Sandy Hook should happen again, the nut job doing the shooting could be stopped.

In my opinion both issues are no-brainers.  The idea that police can't ask to see a carry permit is absurd.  If the person has one, fine.  Move on.  If not, why not?  What is he up to? Period. Done.

In regard to teachers carrying pistols in school, the idea is ludicrous.  Teachers do not belong in schools with hand guns.

What's happening in these two cases is typical of the whole subject in general.  It is utterly devoid of common sense which of course means the paranoid lunatics carrying on many of these conversations are bordering on psychosis.

Great.  I hope they have permits.
Posted by George Stockwell at 4:32 PM No comments:

I'm now all in with the digital age...

For some time now I've embraced technology.  I was my school's web master back in my teaching days and I was also their tech consultant.  I have a desktop computer, a laptop, an iPad, an iPod and an iPhone so I'm not afraid to try new gadgets.  The one area however where I've resisted is in books.  In fact some time ago I wrote right here in this blog spot that I would never succumb to an e-reader and then I went on to list the reasons why.   But frankly that was a little hypocritical because I have read books on my wife's Kindle and I have to say I enjoyed it.

Well this past birthday the family bought me a Kindle.  It's similar to the original Kindle that my wife has except the screen is back-lit which is a big improvement.

I still like books.  I have about 6 stacked up to read but my last experience convinced me it was time for a Kindle.  I was reading Book 5 of the Harry Potter series.  The book is almost 900 pages long so it's big.  Trying to read this huge book in bed was a pain.  Plus now that we take several trips a year to our condo in Florida, Kindles are very easy to pack for travel and going to the beach.

The other thing is that Kindle books are cheaper than hard cover editions.  Paperbacks are still cheaper too but you have to wait for them.

Finally, the frosting on the cake as my daughter reminded me is that many libraries now allow you to borrow books for download to a kindle.  What could be better?  Free books and you don't have to go anywhere.

So all in all I think I'll enjoy my Kindle...but don't worry, I'm still going to be reading hard cover and paper back books. 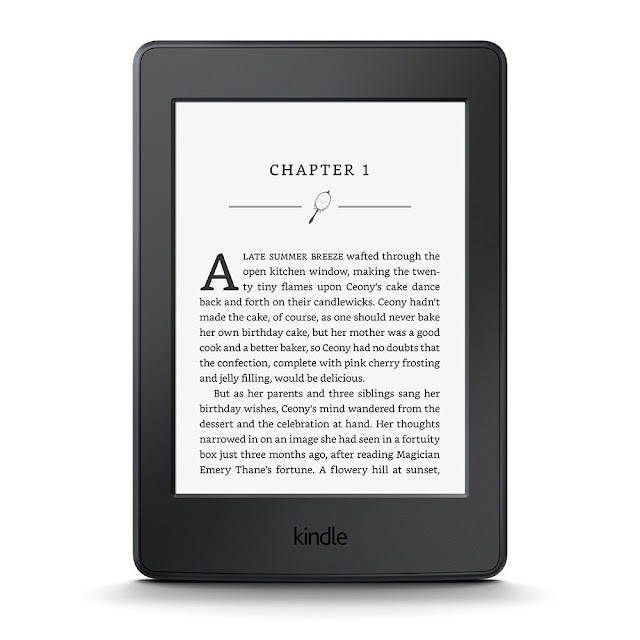 Posted by George Stockwell at 7:29 AM No comments: