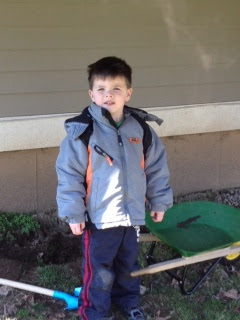 I've posted several pieces about five-year-old Courtney and her eight-year-old sister Brooke and the funny things they say. But I also babysit for Courtney & Brooke's cousins, Cole (age 4) and Nicholas (2) two days a week.

I make Cole & Nicholas take a rest time after lunch. Nicholas goes to sleep almost immediately but Cole plays for a while. Cole likes to tell me he doesn't need a rest time and he says he's not going to sleep. I say that's fine but within about 15 minutes of going upstairs, he's asleep.

Cole likes to come downstairs earlier than Nicholas-sometimes by as much as an hour-and-a-half.
He loves to spend that time with me without Nicholas being around.

Yesterday he asked me how old I was. I told him and also noted that I had a birthday coming up. He said since I'm going to be another year older, I would therefore be taller--maybe someday I might even be as tall as his daddy.

Someday I'm going to go through all my blogs and assemble a compendium of grand child comments heard over the years. I'll put them in a nice binder and present them to each kid on his/her 20th birthday. That means I have to live another 18 years putting me at almost 87.

Hmmmm....well, maybe not.
Posted by George Stockwell at 8:08 AM No comments:

Before going downstairs to play school yesterday, I told Courtney we better put the rest of her peanut butter and crackers somewhere where their yellow lab Lacey won't get them. She has been known to help herself from time to time to whatever morsel may be laying around.

Courtney, age 5, pointed out that that wouldn't be necessary since her daddy trained Lacey not to do that.

I expressed doubt at this but was told by Courtney in a very stern tone that she's lived in that house for 5 years and she ought to know what's going on.

I moved the food anyway.
Posted by George Stockwell at 8:21 AM No comments: 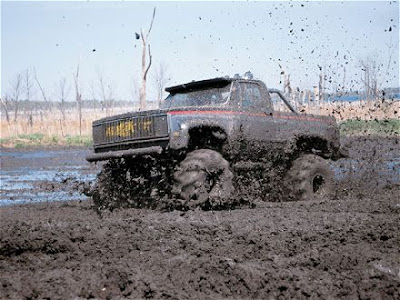 On previous occasions I've described at great length the games my 8-year-old and 5-year-old grand daughters love to play.

Cole (age 4) and Nicholas (age 2) also like to play games but not like the kind the girls play.

Instead, one of their favorite games is to take a large ball of Play Dough and using their mother's rolling pin spread it out into a large flat piece.

Then they assemble their collection of cars and trucks and pretend they get stuck in the Play Dough "mud hole". It's my job to get the toy excavator and pull them out of the mud.

They play at this for a very long time.

I readily acknowledge the role of cultural influences in the kinds of things that interest boys and girls but I am completely convinced that to a great extent they are hard-wired to like certain things.

Nature vs Nurture. They're both at work in the human species.
Posted by George Stockwell at 7:55 AM No comments:

With the exception of a very unusual storm in October, we are now getting the first significant snow storm of the winter of 2011-2012.

I ventured out at about 7 A.M. to get the paper and there was already a good 2 to 3 inches accumulation of dry, powdery snow--perfect for a snow blower but lousy for making snowmen.

Accumulation is expected to amount to about 6-8 inches. Compared to where we were at this time last year, I'll happily take it!

Happy shoveling.
Posted by George Stockwell at 8:29 AM No comments: 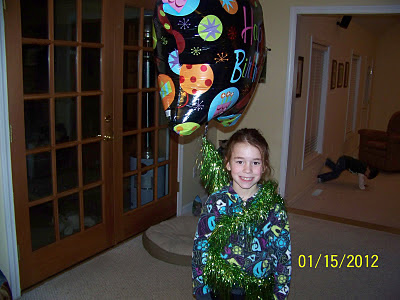 Happy 8th birthday to grand child number one: Brooke Avery Sullivan.
Her birthday was actually celebrated on Sunday, Jan. 15 pictures of which can be viewed on georgeswebpage.com
Where has the time gone?!?
Posted by George Stockwell at 8:42 AM No comments:

The key to a good workout

I've found the sure-fire way to stay motivated on the treadmill. Listen to Newt Gingrich on Meet the Press.

The more that pathetic, lying little weasel talked, the faster I walked. By the time David Gregory was finished with his interview, my cardiopulmonary system had the best workout it's had in weeks.

Thanks, Newt.
Posted by George Stockwell at 11:10 AM No comments:

Yesterday Courtney was sitting at the kitchen table drinking from a small container of orange juice.

As she sat there drinking she thoughtfully wondered why someone wearing pull ups couldn't drink from a container like that.

I was more than a little puzzled by that until I read on the carton "No Pulp".

In spite of occasional mistakes like that, she's an extraordinary kindergarten reader who is quick to remind me that she's the only one in her class who can read.
Posted by George Stockwell at 8:35 AM No comments:

Back to the routine

It's always nice to get to our condo in Florida. The weather is perfect, there's plenty to do and it's even more fun when the whole family is there. But now we're home--and it's good to be back.

We've reconnected with all of our little sweeties, presumed the duties and chores that were awaiting us and best of all, unlike last year, we returned to a snow-free driveway.

So farewell until May, Naples, FL.
Posted by George Stockwell at 7:03 AM No comments:

The hazards of golf

When one ventures out to play golf there can be a number of obstacles--especially if your game is anything like mine.
Water is my biggest enemy closely followed by sand traps, trees and tall grass.
But here in Florida, you have one more thing to contend with--alligators.
Yesterday we saw two of them sunning themselves on the banks of a body of water bordering the fairway. One of my shots got within about 100 feet of one who was fortunately sleeping and not interested in me.
Yet another reason to give up this stupid game.
Posted by George Stockwell at 7:32 AM No comments:

I'm sitting here, sipping wine and watching MSNBC. I can't believe the media--and politicians--are making such a fuss about the Iowa caucus.
It's not even a primary. The number of people voting in this thing amounts to a few hundred. Yet, here we are a nation of millions of voters.
In the overall scheme of things it doesn't mean a thing and even if it did as far as I'm concerned it wouldn't change anything. The field of candidates the republicans have put out there are the most pathetic group of hypocritical weasels I've ever seen.
Obama's got it made.
Posted by George Stockwell at 4:36 PM No comments: