It was a great day yesterday.  I spent the morning with Mike, Becky and the girls to watch Becky run a half marathon.  After lunch I went home and worked on my cranky tiller which I finally got started.

There's much to be said about well made machinery.  My tiller is probably about 30-35 years old.  It's a TroyBilt Pony.  The reason it wouldn't start isn't because of anything inherently wrong with the machine.  It's because the gas probably had water in it and it needed a new spark plug.  Also the throttle mechanism was rusty and stiff so I took everything apart, cleaned it up, put in fresh gas and a new spark plug and PRESTO, it started.

For the next three days I'll be watching the boys and doing my volunteer thing.  I also have to get my weekly column written for HamletHub since I won't be here Friday to do it.  The problem is I have no idea whatever on what to write about this week.  Any ideas?

Then it's up to Becky's Thursday to drop off the tiller for Mike and watch the girls.  Finally, first thing Friday morning it's off to Florida for a week.

I may or may not write one or two blogs from there.  We'll see how it goes.
Posted by George Stockwell at 6:56 AM No comments:

Guy two:  Never works out, smoked for many years, eats whatever he wants,  sedentary life style,  over weight--going strong.

Explain, please.
Posted by George Stockwell at 5:17 PM No comments:

A Visit to A Farm 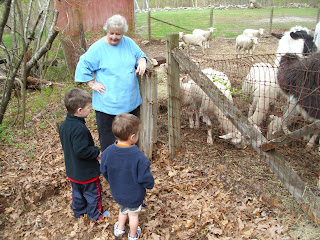 I took Cole & Nicholas to a mini farm to day.  They saw, fed and petted sheep, lambs and a llama.  What is it about farms that kids love?  Well, certainly the animals for one.  But they also like the fact that it's  an adventure with grandpa and it involves something for which they don't have much experience.

We had a great time and will surely do it again.  My next trip there will be with Brooke & Courtney.
Posted by George Stockwell at 6:40 PM No comments: 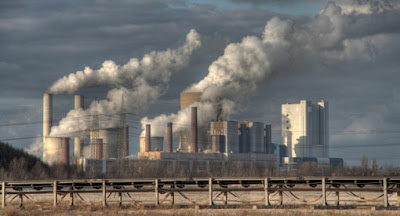 School children and "green" conscious adults across the nation are celebrating Earth Day this weekend.

I recall during my teaching days the great lengths we'd go to to bring awareness to students regarding the problems we face in terms of the Greenhouse Effect and global warming.

We had kids make posters, we saw movies and put on skits of our own.  Very often we had visitors come to the school and make presentations.

Community efforts are in full swing also with groups of people roaming the streets with garbage bags picking up litter.  Towns and cities of course have been running recycling programs for several years now.

All of this is good.  We need to be recycling glass, paper and plastic.  Our landfills are filling up. But here's the problem.  In terms of actually reducing our carbon footprint it's small potatoes.  The fact is one coal fired power plant like the one shown here does more harm to the earth than all of the litter combined in the country.  And given the fact that this country has enough coal to keep us going for many, many years, the prognosis doesn't seem promising...unless government and industry work together to find ways to burn coal cleanly.  That will involve tax dollars and reduced profits but the end result will be worth it.

Unfortunately a republican controlled Congress is not in the least bit receptive to this idea.  More reason to make some dramatic changes in Congress this November.
Posted by George Stockwell at 9:41 AM No comments:

Yesterday I spent much of the day with all four grand children.  They're ages 8, 5, 4 and a recently turned 3. 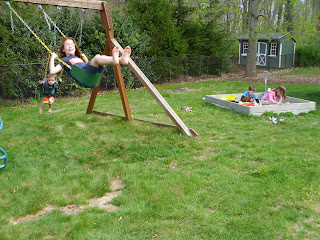 As I was running around after them, settling little spats, dealing with some sharing issues, taking them outside to play and later getting lunch organized I thought about the many families that have four kids about those ages.  It must be very challenging.

For the most part everyone got along very well and as expected Brooke helped out a great deal with the younger ones but by 5:30 I was home relaxing.  Their parents still had  to get dinner ready, give baths and have some family time.

Of course a huge part of coping with large families is to establish a routine and a set of expectations.  After that, things pretty much fall into place.

In fact the only thing I thought was going to be a problem was when I was fixing lunch.  I assembled them in the family room to watch a show so they wouldn't be underfoot in the kitchen.  My dilemma was finding something that would appeal to all of them.   Incredibly enough, they immediately agreed on Max & Ruby!

I could never figure out the appeal of that show.  It's about two rabbits.  Ruby is Max's big sister.  I have never seen their parents but they do have a grandmother.  On top of that the animation is very primitive.

Anyway that's what they watched until the pizza was ready.  Which brings me to the topic of food.  They were bottomless pits.  Imagine feeding a family of four children these days?  I do the grocery shopping for my wife and me every week.  We are not big eaters by any stretch yet I can't get out of the store for less than $100 and it's often more.

And feeding them is just the tip of the iceberg where it comes to the cost of raising a family. It's no wonder both parents have to work.

All in all it was a great day with four great kids.  I look forward to more like this.

Posted by George Stockwell at 7:24 AM No comments: 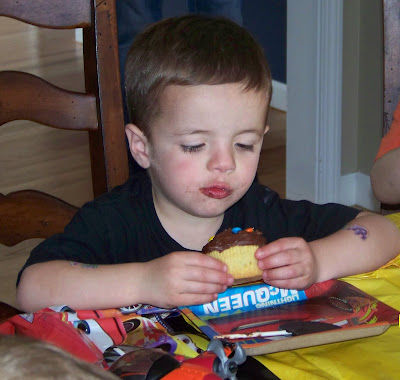 Yet another milestone occurred yesterday to remind us that time is in fact marching on and at a pretty furious rate at that.

Cole had his kindergarten screening. Jen reports he did fine so maybe they'll be sending him this year. Newtown is planning to offer full day kindergarten so I'm sure that will figure into the decision.

Now there's only one more to go--Nicholas. Before you know it, all four grand children will be in school full time. Looks like I'll have to find other ways to occupy my time. Maybe volunteering in their rooms?? Hmmmm...That's an idea.
Posted by George Stockwell at 7:23 AM No comments:

A Visit with Jack

My last blog reported on an unfortunate situation in a veterans hospital. It was about a friend of mine named Jack.

Yesterday, before I picked up Brooke & Courtney from school I looked in on Jack. He was very happy to see me. As we chatted, the conversation inevitably drifted back to his WWII days. He loves to tell stories about his navy days on a battleship.

We agreed that I would try to look in on him some time on Fridays since my other days are pretty much filled up with other things. I used to visit him on Tuesday afternoons but I'm reserving that because from time to time I help out my daughter then or I do something at the other places where I volunteer.

I'll have to start searching for more pictures of navy warships to show Jack. He also likes cars so I'll be able to mix it up a little.
Posted by George Stockwell at 6:49 AM No comments:

I generally try to keep these blogs fairly upbeat (except when I'm venting about something or the topic is politics). But unfortunately this is not one of those.

I used to visit a WWII navy veteran at the Lutheran Home in Southbury. His name is Jack. He wasn't happy there because there were no other veterans for him to talk to so he transferred to the Veterans Hospital in Rocky Hill, CT. This all happened about a year ago.

Yesterday, his brother called me and told me he was back at the Lutheran Home and that he would like for me to look in on him. Apparently, conditions at the brand-new veterans hospital were dreadful. Most of the men with whom he hoped to make friends were in fact not WWII veterans. Rather, they were men who served in more recent conflicts like Viet Nam and Iraq.

Most of the men were seriously impaired from injuries or drug dependence. Jack's brother went on to report that while the hospital looked shiny and new from the outside, it was everything but that inside. He reported that the place was filthy inside. For example he reported that the bathroom in his room hadn't been cleaned in a very long time. It contained days-old vomit and feces from his roommate.

The hospital was understaffed and the workers who were there were all 'foreigners' who spoke little if any English. They were unfriendly and generally unresponsive to the needs of the residents.

Jack couldn't take any more so his brother moved him back to his former location.

This is a very sad situation. Is this typical of veterans hospitals across the nation or just this place? Someone needs to look into this.
Posted by George Stockwell at 7:25 AM No comments:

The Ratings War Is On

The Today Show and Good Morning America are battling each other for morning viewers. GMA has been nibbling away at Today's lead in recent months so NBC is getting nervous.

So what does NBC do to combat this erosion in viewers? It recruits none other than air head, gas bag Sarah Palin to co-host! Good move Today. You lost me.

Oh. In response to this bonehead move, ABC got Katie Couric to fill in for Robin Roberts for the week. A much better move in my view.

Actually, I don't care what either of them do. Morning TV has sunk to new lows in recent years. Fortunately I get Fox Business News station which airs the Imus in the Morning show. Depending on who he has for guests, this is preferable to network TV.

Lest you get the wrong idea, I don't actually watch morning TV for very long. With the exception of Tuesdays, I'm usually up and out fairly quickly.
Posted by George Stockwell at 7:57 AM No comments: