Are you watching the debate tonight? I'm not. I've known for a long time who I'm voting for.  I'm convinced most other people also know. The only reason people are watching is not because they can't make up their mind. It to see the guy/gal they don't like crash and burn.  It something like passing a car wreck.  You know it's ugly but you just can't help but look.

Political debates are like that.  It's all theater.  We should have the election right now and end this torturous political season.

Posted by George Stockwell at 4:48 PM No comments:

It's officially Autumn-my favorite season of the year, although I don't much like what follows.  Even so,  to me it's better than the miserably hot summer we are leaving behind.

To learn a few interesting things about autumn, click here georgeswebpage.com/almanac
Posted by George Stockwell at 10:36 AM No comments:

It seems like wildlife is closing in on our property.  We've had frequent visits from flocks of turkeys, many deer wander though the yard and the occasional fox parks himself  by my wood pile waiting for something tasty to appear. Birds, squirrels and chipmunks of course are plentiful.

Sunday night I was awakened by a pack of coyotes in the woods across the street from our house. They made a huge racket and the next morning I discovered one possible reason why: a bear had been in the neighborhood as evidenced by my trashed bird feeders.  The feeders were mounted on a sturdy metal pole which had been bent in half like a tooth pick.

I propped it up and the next morning it was knocked over again which was a surprise to me because I had been told that bears rarely visit the same place two nights in a row.  I once again propped it up only to have a large hawk come down and perch on it looking for a meal.

I finally got it through my head that I should take the feeders down for a while at least until the bear hibernates.  Then I'll try again.

I don't have pictures of the bear-just evidence he was there-but I do have other pictures of various fauna and flora in our yard.

Check them out on my web site: georgeswebpage.com Click on the photo gallery link in the navigation bar.


Posted by George Stockwell at 9:44 AM No comments:

Forty nine years ago today Sandi and I got married. Like any marriage that has lasted that long, there have been many ups and downs but I'm happy to report there have been far more ups and I hope there are many more years ahead.  I firmly believe the best years are in front of us.

We are definitely a rare couple these days.  How many married couples can say they've made it that far? 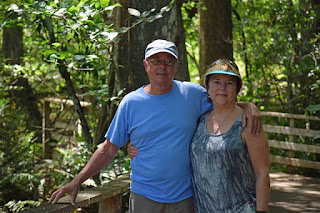 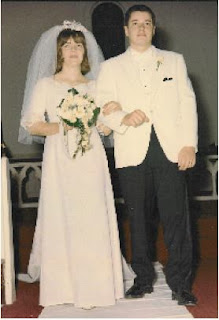 Posted by George Stockwell at 8:07 AM No comments:

My 55th high school reunion was a great success.  Eighteen of the 51 graduates showed up.  Some have passed away while others where not well enough to attend or just didn't want to.  And then there were those we've yet to locate.  At any rate it was a great visit for those who did come.  We shared many happy memories.

Here's the crew.  See if you can pick me out. The man seated in the front is the only teacher to attend.  He taught math and was very popular. 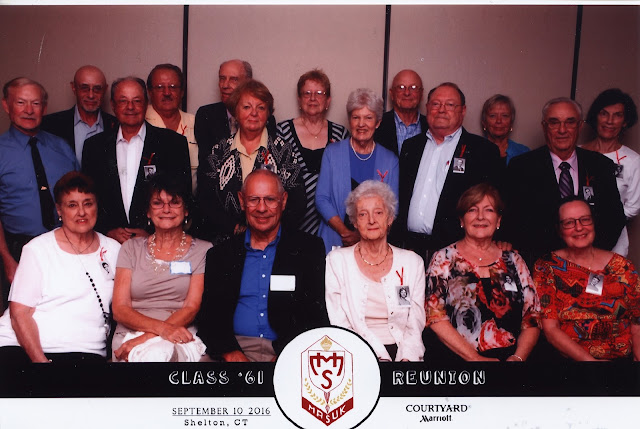 Posted by George Stockwell at 10:25 AM No comments:

1. I regret to report that the Newtown Labor Day parade wasn't up to its usual standards. There weren't nearly as many marching bands but on the bright side my two grandsons marched with  other football players. Still it was fairly good although I missed my favorite part which unfortunately comes at the very end-the tractor parade.

2.  Tomorrow night I, along with several other former classmates, will be celebrating our 55th high school reunion. It doesn't seem possible that it's already 55 years but here it is.  I've kept in touch with some of the people who will be there but as one would expect every five years at our ages is going to be marked by loss.  As it happens there will be several people there who have lost their spouses. But somehow we'll manage to have a good time.

3. The weather is mercifully beginning to cool off (although today may be noted for  record setting heat). Next week the temperatures will be much more comfortable allowing me to get in the yard and get several chores done.  But I'm not complaining because you-know-what is in the not too distant future!

That's it for now. Please notice I've avoided comment on the dismal political scene.  Also, be sure to check my web site for updates-especially with Autumn approaching.  There will be lots of photo opportunities.


Posted by George Stockwell at 4:19 PM No comments:

Does your new car have a spare tire?

Does this strike you as being a silly question?  Had someone asked me a month ago, I would have answered of course-although it's probably a 'donut' but that's OK.  It'll  get you to where the flat can be fixed. Or so I thought until my wife had a blowout one Saturday evening not far from home.  When a passing Good Samaritan stopped to get the spare out all he found was a small compressor pump.  The idea was to hook the pump up to the power outlet in the car, turn it on and hope that the sealant contained inside would seal the leak in the tire and inflate it.  It didn't.  The hole was too big.  We had to have it towed putting the car out of service until Monday afternoon.  A major pain.

I called Acura about this and they gave me a bunch of bull about their research showing people rarely change their tires anyway so why not make the car lighter by not including one.  Theoretically, by making the car a few pounds lighter the gas mileage would improve enough for the owner to see a savings.  That of course is ridiculous.  The reason they do it is to save money which I'm sure is not passed on to the consumer.

Added to this outrage is the fact that the pump included with the car is a one-time use pump.  The Acura dealer told me to toss it.  So now I don't have a spare OR a pump.  After complaining bitterly, they agreed to give me a new pump.  I bought a spare tire kit anyway which they sold to me at cost (yeah, sure) but installed at no charge because I'm a very good customer (this is our 4th Acura all purchased from the same dealer).

I went to the internet and discovered this is a very common practice affecting cars from Chevys to BMWs. In fact just this morning my son got a flat tire on his BMW but at least his car had run-flat tires which are good for about 50 miles.  Just enough to get to a service station.

This is an unacceptable situation to me.  We plan to keep our current car for a very long time but when it does come time to lease or buy a new one, I'll make darn sure it has a spare.

Posted by George Stockwell at 11:52 AM No comments: