1.  I am thoroughly disgusted with Senate republicans who have shown blatant disregard for the country in general and the Constitution in particular.  Their loyalty to the Republican party far exceeds their concern for anything else.  They are pathetic hypocrites.  The real tragedy is the number of ignorant fools who support them.

2.  This blast of cold weather is putting unusual demands on my wood supply.  I thought I had enough on hand for 3 winters.  It's now looking like I'll need more after next season.  The good news is there is wood available around my yard and the furnace has not been running much.

3.  My wife is having anxiety attacks because she doesn't think our spending for the grand children this Christmas has been equal.   I argue that we got them plenty of stuff that they will enjoy so we shouldn't worry.

4. A couple of weeks ago I took a chance and put the bird feeders out.  Sure enough a bear got to them.  He didn't break the feeders or bend the mast they were mounted on though.  All he did was  take the suet.  I put everything back in place and now I put the feeders out in the morning and take them in at night.  Seems to be working well.

5.  I had some work done recently to my truck and was told I need extensive front end work including brakes.  Apparently it isn't unusual for four wheel drive pick ups to experience this.  The estimate for everything was around $3000.  I'm getting a second opinion when we get back from Florida.  The truck is a 2008 with 66 thousand miles on it. It hasn't had a single major problem in all that time so it owes me nothing.  And it's a lot cheaper to fix than a new truck so we'll see.

6.  My 4 year-old three stage Cub Cadet snow blower remains problematical.  The engine is great and when it's working, it does a terrific job.  The problem is with the drive wheels.  I can be going along smoothly only to have it abruptly stop.  I keep trying different speed selections and eventually it continues-but slowly.  Newtown Power Equipment has not been helpful.

That's all for now.  Have a very Merry Christmas and Happy New Year.  Next stop: Naples, FL. with my daughter and her family.  Back home January 12th in time for tax season. I'll post another piece from Florida.
Posted by George Stockwell at 10:49 AM No comments:

In every person's life-especially people like me who are looking down the barrel of 77-there are a few things that happen that leave an indelible memory.  You know exactly where you were, what you were doing and the time it happened.  Today is one of those days.

Exactly 7 years ago today-practically to the hour I write this-a deranged lunatic entered Sandy Hook Elementary School and murdered 26 people-20 of whom were children.  As I look back I wonder how much progress has been made in 1)identifying individuals who commit things like this and 2)efforts to keep guns out of the hands of crazy people.

I regret to report there has been sadly little progress.  To the contrary, since Sandy Hook there have been more school shootings and many, many more shootings involving other venues.

The pro-gun politicians will do nothing but utter "thoughts and prayers" and collect their blood money from the NRA.  The gun control people have little recourse but to continue to lobby law makers for change.

It is a sad scenario.  In the meantime all we can do is the best we can.
Peace to you and yours in this holiday season.

Posted by George Stockwell at 10:59 AM No comments:

Being the history buff I am, I can hardly let the day pass without mentioning that today is Pearl Harbor Day.  On this day 78 years ago, the Empire of Japan launched an assault on Pearl Harbor causing over 3000 casualties and destroying several ships in the U.S. naval fleet, among them the Arizona, which can still be seen at the memorial established for it. 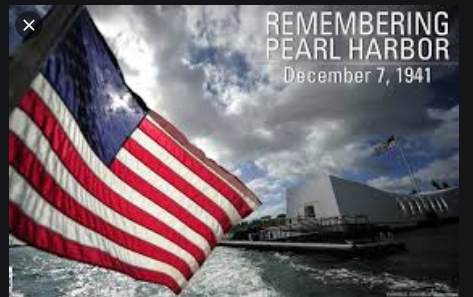 Posted by George Stockwell at 10:04 AM No comments: