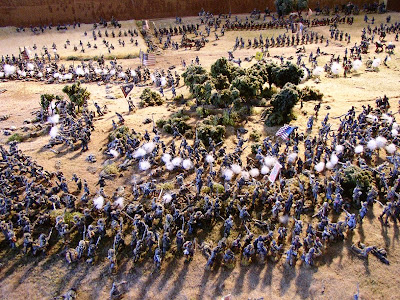 July 3, 1863, exactly 148 years ago was the 3rd--and last--day of the Battle of Gettysburg, the deadliest battle of the civil war.

Most historians regard it as the turning point of the war which until then had been going largely in the Confederacy's favor.

But the Battle of Gettysburg broke the spirit of the Confederate army.

The famous Pickett's Charge was the final straw, so to speak.

The ill-fated attack resulted in the following exchange between General Robert E. Lee and General George Pickett:
Lee: General, assemble the rest of your division.
Pickett: Sir, I have no division.

Total combined losses after the 3-day battle were in excess of 50,000.

Have a happy July 4th.
Posted by George Stockwell at 7:06 AM