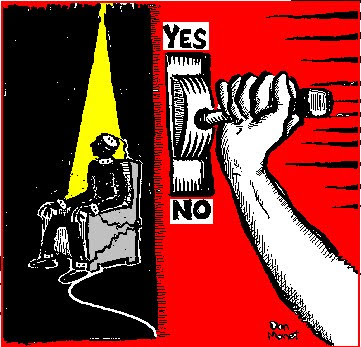 Every time I start having doubts about the morality or value of the death penalty, something comes along to complicate the issue.

The latest horror was a story about an eight-year-old Hasidic Jewish boy who got lost walking home from a New York City day camp.

He stopped to ask a man for directions. The man took him to his apartment, killed him and dismembered his body. But, incredibly, before doing that, he stopped at his dentist's office to pay his bill and then took the boy to a wedding.

From there he took him to his apartment and did the rest.

The killer's attorney is arguing insanity. If found to be legally insane, he'll be institutionalized until deemed sane enough to stand trial--in other words, never.

Make no mistake about it. Too many innocent people have been put to death. But with modern forensic techniques such as DNA testing it is now possible to be more certain than ever that someone is guilty.

The killer in this case was identified through a surveillance camera and he later confessed. The boy's body was ultimately found in his apartment.

The whole argument regarding his sanity is absurd. Of course he's crazy. But I don't care. He's not fit to inhabit the earth with the rest of us.
Posted by George Stockwell at 8:02 AM